Peter McNab Passes Away At 70 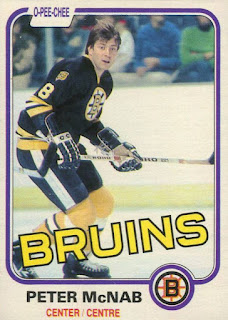 Sad news as former Boston Bruin player and broadcaster has passed away at the age of 70. He had a brief fight with cancer.

Peter McNab's dad was a former journeyman hockey player, who won a Stanley Cup with Detroit in 1950, and later went on to become the New Jersey Devils GM for a time, but most of his hockey career was spent in the minor Leagues. Perhaps that is why Peter was one of the first NHL'ers to go the route of US College Hockey before embarking on an NHL career.

After a fine College career Pete signed with Buffalo in 1973. After two full seasons in Buffalo where he scored 22 and 24 goals, Harry Sinden signed Peter as a free agent on June 11, 1976. He then preceded to etch his name among Bruin scoring leaders.He was a fine puck carrier (though a lumbering skater), with a deadly accurate shot, that saw him notch 82 power play goals in his career. He was an excellent power play performer. Firstly he was excellent on face-offs, so coaches like to put him out to start the PP with possession. He would then park his big frame in front of the net, though he was anything but a dominating physical player. He was not there to simply obstruct the goaltender's view. He had excellent hand skills score from in tight on those loose pucks and rebounds. He also had excellent hand-eye coordination for tip-ins.Peter's best game as a Bruin came against the Colorado Rockies, February 20, 1979, when he  had a hand in all 5 Bruins goals in a 5-3 Bruin victory. When he left the Bruins he ranked in the top ten all-time in goals, assists, points and playoff scoring for the Bruins.Peter was traded to Vancouver on February 8, 1984 for Jim Nill. After the 1984-85 season in Vancouver, Peter found himself in New Jersey where his GM was also his dad. The contract negotiations must have been the ultimate in allowance discussions between father and son.McNab retired in 1987 with 954 career games played. He scored 363 goals, 450 assists and 813 points.
at November 07, 2022