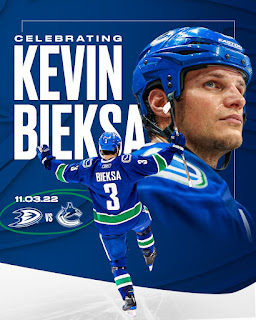 Kevin Bieksa went from a fifth-round afterthought in the 2001 draft to the prototypical defenseman every team in any era wants to have on their blue line.

The Grimsby, Ontario native was a bit of a late bloomer. He went Bowling Green on a scholarship where he concentrated both on schooling - he earned a degree in finance with an impressive. 3.42 grade point average - and hockey. When he graduated he turned pro with the Canucks organization, but still really was not on the team's radar.

Bieksa's first contract was only a minor league deal with the AHL's Manitoba Moose. And Bieksa thought he blew it before his career even started when he knocked out teammate Fedor Fedorov - Sergei's younger brother, but an unpopular teammate nonetheless - with a single parking lot punch over a spilled beer. Instead, as legend has it, Canucks boss Brian Burke said he wanted to sign Bieksa to a NHL contract the very next day.

Bieksa's first full pro AHL season - 2004-05 - really turned heads.  12 goals, 39 points, 192 PIMs and plus-21 -- eough to land a place on the AHL's all-rookie team. But it was toughness and presence, both on and off the ice, that really impressed. Although he lacked the offensive game, he was very comparable to a Chris Chelios in terms of his swagger and style of defensive play.

Bieksa would graduate soon thereafter to the Canucks and become one of the all time great defensemen and characters in team history. But it almost never happened due to bad injury luck

Early in the season in 2007 the skate of Nashville's Vernon Fiddler caught Bieksa just above his own skate, slicing open his calf and setting in motion a series of events that included surgery, more stitches than he could count, a couple of casts and, of course, all kinds of quality time with the Canucks trainer.

"I spent more time with him than I did with my wife," Bieksa joked.

Fiddler's skate had cut deeply into muscle tissue around the Achilles tendon and what was originally though to be two weeks off suddenly turned into four months.

Bieksa put in the work - an put on kevlar socks that are now more common in the NHL - and got back to the ice.

Bieksa would become a key member of the Canucks dominant teams that featured the Sedin twins, Robert Luongo, Ryan Kesler and Alex Burrows. Bieksa wasn't the most notable offensive player, but it was Bieksa who scored the biggest - if flukiest - goals of all time. It was the goal that sent the Canucks to the 2011 Stanley Cup final.

“I just wanted to make sure I didn’t flub it into the corner — just put it somewhere on net and luckily it got there, and just barely,” said Bieksa. “It’s just a great feeling.”

For me, everything you need to know about Kevin Bieksa happened in 2014. The Calgary Flames and Canucks had a line brawl right off of the opening faceoff. Old time hockey at it's best! Both team's lined up with their toughest players, but the Canucks had a rookie in his first NHL game taking the faceoff named Kelln Lain. Though he was six foot six, he was not really a fighter, and probably the only guy on the ice who did not know what was about to happen. So Bieksa, the defenseman, stepped up to take faceoff and take the fight for the kid.

Bieksa, could definitely handle himself, and as his career continued he became known for throwing Superman punches to knock out opponents. But as much fun as Bieksa's after the whistle activities were, it can not be overstated that he was an excellent player in his own right.

“Kevin wanted to go with everybody and everybody wanted a go at Kevin because he was an unknown entity,” said Marc Crawford, the Canucks coach at the time. “I told Kevin do not fight this guy — we need you on the ice tonight — but it was too hard for him. He couldn’t leave it alone. It carried him a long way as a guy who had his teammates’ back, but he also had a good shot and instincts to jump into the hole and you could just see that he was a player.”

He was also great in the community - his involvement in mental health initiatives being most notable - and a legendary prankster.

“I grew up with (Ryan Kesler) Kes and (Alex Burrows) Burr, the twins (Sedins) and (Alex) Edler. I gave my heart and soul to that team and community and people were always great to me.”

Bieksa would finish his career in Anaheim and later would become the star commentator on Hockey Night in Canada in the post-Don Cherry era.