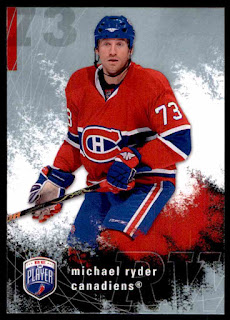 Michael Ryder was an industrious winger (he could play both sides well) who anticipated the game well.

Though his best statistical season came in his only full season with the Dallas Stars and he was a vital part of Boston's 2011 Stanley Cup championship, Ryder will best remembered as Montreal Canadiens #73 where he played the bulk of his career. (He finished his career with the New Jersey Devils, too).

The proud Newfoundlander was destined to star in the province of Quebec. He left "The Rock" to play junior hockey with the Hull Olympiques and apprenticed with the AHL's Quebec Citadelle's before joining the Canadiens in 2003-04.

He quickly established himself as sniper, blessed with a deadly wrist shot and a great one timer. He was a tricky stickhandler which helped mitigate his lack of speed. He wasn't a pretty skater - sluggish might be the word to best describe it - but he was very sturdy and strong on his stick. But he could read plays well and position himself well to create space and scoring chances.

In his rookie season with the Habs he struck for 25 goals and 63 points, finishing as the runner up (to Boston goalie Andrew Raycroft) in Calder trophy voting as NHL Rookie of the Year.

Ryder followed that up with back to back 30 goal campaigns before slumping in 2007-08.

Ryder joined the Bruins in 2008-09 for three seasons, culminating in a strong 2011 post season. He scored 8 goals and 17 points in helping the Boston Bruins win the Stanley Cup.

Ryder cashed in on that success and signed a big two year, $7m deal with Dallas the next season. He meshed well with Loui Eriksson in Dallas and scored a career high 35 goas, 28 of which were at even strength.

But part way through the following season he was traded back to Montreal. He found some old Montreal magic in the final 27 games that season, scoring 10 goals, but left to New Jersey as a free agent in the summer of 2013.

Ryder would play two seasons in New Jersey before retiring in 2015.