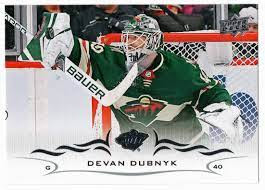 Devan Dubnyk made his retirement official this week. The lanky goalie from Regina had a 253-206-54 record over his dozen seasons in the NHL with the Edmonton Oilers, Nashville Predators, Arizona Coyotes, Minnesota Wild, San Jose Sharks and Colorado Avalanche.
"Doobie" always was of special interest to me. His dad, Barry, was also a goalie and he began his junior career in the 1970s in my small hometown with the Terrace Centennials, a feeder team for the WHL's Calgary Centennials. He went on to a long career with IBM and then owned a Mazda dealership, but never came close to the NHL.
So when Devyn Dubnyk became a top ranked goalie in 2004, I put two and two together and began cheering on the young netminder.
After a fantastic career with the WHL Kamloops Blazers, Dubnyk was drafted 14th overall in the 2004 NHL entry draft. He was the 2nd goalie drafted, behind Al Montoya (6th overall). Cory Schneider (26th), Thomas Greiss (94th), Anton Khudobin (206th) and Pekka Rinne (258th) were other notable goalies drafted that year.
It took Dubnyk a few years to apprentice in the minor leagues but he became a full time Edmonton Oiler in 2010 and for the next five years he earned a lot of respect for his solid play and his hard work.
Dubnyk was one of the original giants in net, taking up a lot of shooting space with his 6'6" frame. He worked hard to perfect an economical butterfly technique to always stay square to the shooter. Like a lot of the early giant goalies he was susceptible to quick cross crease passes where he could not square up fast enough.
Dubnyk was dumped by the Oilers in 2014 and it took him a couple of years - and four organizations - to find his form again. But his 2014-15 season with the Minnesota Wild was the best of his career. He posted a sparkling 1.78 GAA, a .936 save percentage and a 27-9-2 record with 5 shutouts. That earned him finalist status for the Vezina Trophy as the league's top goaltender. He also won the Bill Masterton Trophy award for his dedication to the game.
That season probably extended Dubnyk's career by many years. He never quite got back to that level, but he was a solid goalie in Minnesota through the year 2020.
Dubnyk never won the Stanley Cup, but he enjoyed championship success at the 2006 World Juniors and the 2012 Spengler Cup.
at October 30, 2022