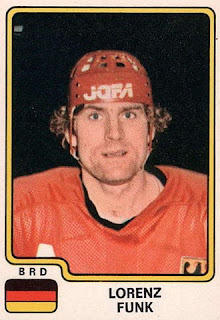 Lorenz Funk Sr. was one of Germany’s most notable ice hockey players, coaches, managers and directors. So it comes as no surprise that he was inducted into the German Ice Hockey Hall of Fame.

He began his active career at EC Bad Tölz, winning the German Championship in 1966, but moved to Berliner SC in 1972, winning the German Championship in 1974 and 1976. He retired in 1986, but came back in 1988 with EC Bad Tölz to play with his sons Florian and Lorenz, Jr. in the same line. At the age of 56 he made another comeback for just one game with Berliner SC.

As a national player he played 225 games and took part in three consecutive Olympics between 1968 and 1976 as well as in 13 World Championships between 1966 and 1979. While playing on a line with Erich Kuhnhackl and Wolfgang Boos, the highlight of his career came in the form of a bronze medal at the 1976 Olympic games. In total Funk played 255 international games for West Germany, at the time a record.

After his playing career ended he began coaching in 1986 with Berliner SC, followed by EC Bad Tölz, SV Bayreuth and from 1991-2000 at Eisbären Berlin, becoming the manager and director in 2000 (now Berlin Capitals) and president up to 2004.

In 1988 he was inducted into the German Ice Hockey Hall of Fame.