Snell was a promising right winger out of the Regina Pats junior organization. Snell was drafted by the Pittsburgh Penguins with the 14th overall draft pick in the 1968 NHL amateur draft.

Snell reported to the Penguins farm team in the Central Hockey League - the Amarillo Wranglers. Now the Texas Panhandle was a very odd place to start out your NHL dream, but Snell put in a good season, scoring 26 goals, and earned a late season call up to the Penguins in March 1969. 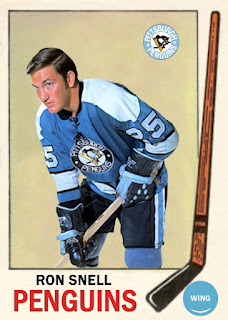 Snell wasted no time to make an impression in the NHL, scoring a goal in each of his first three NHL games!

The next night at home against Los Angeles, Snell beat Wayne Rutledge with the eventual game-winning goal at 14:26 of the second period to give Pittsburgh a 5-2 lead in an 8-4 win.

A couple of nights after that, on March 29, Snell scored at 15:47 of the first period to pull Pittsburgh into a 1-1 tie against future Hall of Famer Bernie Parent in a 3-3 game against Philadelphia.

Snell played on more game before the season ended, earning an assist. Not bad, eh? 3 goals, 4 points in first 4 NHL games is a good way to begin your NHL career.

Unfortunately for Snell, that was basically it for him. He reported to the Penguins AHL farm team the following season - a step up from the CHL for sure. And he did get another 3 game look with the Penguins, picking up another assist. But then he was buried in the minor leagues for most of the rest of his career.

He did have a two year stint with the WHA powerhouse Winnipeg Jets in the mid 1970s. He found a role in the first season (scoring 24 goals, 49 points in 70 games) but stagnated badly in year two (no points in 20 games).