What If Wayne Gretzky Had No Hart? 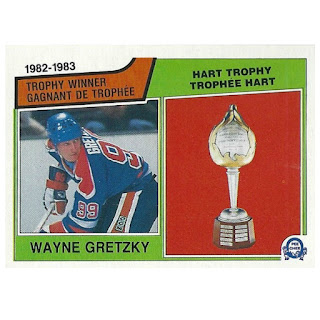 Wayne Gretzky won a mind-boggling eight consecutive Hart Trophies as the National Hockey League's Most Valuable Player. He even won a ninth Hart, making in nine out of 10 years - the entire decade of the 1980s.

Think about that for just a moment.

There was no questioning Wayne Gretzky's dominance, and his decade long league MVP status is exhibit one.

But there were runners-up, and they all deserve some sort of recognition, too. So let's take a look at who was the best player in hockey during each season of the 1980s who was not named Wayne Gretzky.


1979-80 - Marcel Dionne, 166 votes. This is not a big surprise as Dionne beat out Gretzky for the Art Ross Trophy as the league's leading scorer, though on a bit of a technicality. Both players tied for the league lead with 137 points, but Dionne scored two more goals than did the teenage phenom. The tie-breaker rule gives the award to the player who had more goals. Other Finalist: Tony Esposito (64 votes)

1980-81 - Mike Liut, 237 votes. Despite setting new NHL record for assists and points in a season, Gretzky barely won this Hart vote with 242 votes. Edmonton struggled despite Gretzky's greatness. Meanwhile in St. Louis goalie Mike Liut was nothing short of spectacular. His peers thought he was the most dominant player that season even, voting him as the Lester Pearson award winner (now known as the Ted Lindsay Award.). Other Finalist: Marcel Dionne (24 votes)


1983-84 - Rod Langway, 102 votes. This wasn't even close, as Gretzky had 306 votes. But it is amazing to think that a defensive defenseman who scored 78 fewer goals and and 172 fewer points than Gretzky was deemed to be the second best player in the league that season! Other Finalist: Bryan Trottier (54 votes).

1984-85 - Dale Hawerchuk, 91 votes. Another 200+ point season means another Hart vote that is not even close as Gretzky gets 303 votes. But Hawerchuk fuels the Winnipeg Jets with 53 goals and 130 points, third best in the league behind Gretzky and Jari Kurri. Other Finalist: Pelle Lindberg (56 votes)

1985-86 - Mario Lemieux, 130 votes. With a record setting 163 assists and 215 points they should have just used Gretzky's 281 votes to suggest renaming the trophy after him. But young Mario Lemieux, the man who would one day take the Hart away from Gretzky, has a fantastic season, too. He scores 48 goals, 93 assists and 141 points. Other Finalist: Mark Howe (32 points).


1987-88 - Mario Lemieux, 292 votes. With Wayne Gretzky missing 16 games due to injury, Mario Lemieux runs away with the Hart Trophy thanks to his 70 goal, 98 assist, 168 point campaign. But did you know another player outvoted Gretzky in this balloting? Oilers teammate Grant Fuhr had 106 votes to Gretzky's 73.

1988-89 - Mario Lemieux, 187 votes. Even though Mario outscored Gretzky 199 points to 168, Hart Trophy votes gave Gretzky the decided edge with 267 votes. It was Gretzky's first year in LA and he helped turned the lowly Kings into playoff threats. Other Finalist: Steve Yzerman (109 votes).