Every kid dreams of playing in the NHL. Samuel Morin accomplished that, but the dream did not go as one would hope. 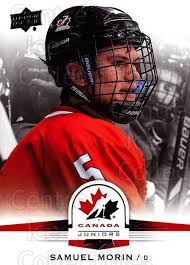 The happy-go-lucky defenseman with an infectious attitude that every teammate and coach loved to have around had to retire prematurely due to repeated knee injuries.

"He won't be able to return to play, unfortunately," Philadelphia Flyers general manager Chuck Fletcher said. "He's had too many knee injuries, he's not going to be in a position to continue his career. This offseason, we'll sit down with Sam and see if there's something that he would like to do going forward."

During November 2019, Morin tore the ACL in his right knee for the second time in a span of 19 months. Following another daunting surgery recovery, the 2013 first-round pick went on to play a career-high 20 games in 2020-21. Over the previous four seasons, his injuries limited him to nine combined games.

“It’s major surgery, you need help,” Morin said in May 2021. “For me, I broke my jaw, I’ve got a lot of injuries, but this was the most painful, after ACL surgery.

Always one to find the positive in every situation, the hard work he had to put it in to get another shot led to a career highlight.

"I remember as soon as I stepped on the ice in training camp, I was like, ‘Man, I love that game.’ Good thing I didn’t give up, I just love it.”

Morin was a promising 6 foot 6 defenseman out of the Quebec League. The Flyers made him the 11th overall selection in the 2013 draft.

"Tremendous kid, huge heart, huge determination," Fletcher said. "Did everything he could to be a player; no one appreciated being a hockey player better than Sam Morin. But there's just, unfortunately, too much damage to the knee to resurrect his career."

Morin only got to play in 29 NHL games.

"I just played hurt. I really, really wanted to be a hockey player, but at the same time, this year when I got hurt again before training camp, I kind of knew it was pretty bad."

"I'm really, really proud of myself," Morin said. "The pain I went through physically and then mentally, a lot. With all those injuries, I was always coming back, I was always smiling at the rink, I was happy to be there. I'm happy about my career, I think I gave it my all.