Boston Bruins goalie Tuukka Rask, a veteran of 15 seasons, also announced his retirement from the NHL in 2022 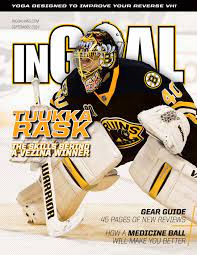 "Today is a day that I hoped would never come," Rask wrote on social media. "But now that it's here, I feel I owe it to everyone to hear it from me. When I made the decision to have surgery on my hip last summer, I did so knowing that the road to recovery would be challenging. I also knew it was something I would have to do if I wanted to give myself a chance to play my best hockey again. The rehab, the workouts, the practices -- all of it was with the intention of getting back to where I needed to be to help my teammates win games and make another run at the Stanley Cup. Over these last few weeks, I've realized that my body is not responding the way it needs to for me to play at the level I expect of myself and that my teammates and Bruins fans deserve. Therefore, it is with a heavy heart that I announce my retirement from the game of hockey."

Originally drafted by Toronto 21st overall in the 2005 entry draft, Rask was traded to Boston before ever suiting up for the Leafs and made his NHL debut for the Bruins in November 2007. He would be a Bruin for life, leading the franchise to three appearances in the Stanley Cup final, winning one of them.

"While I am sad to say goodbye to the game I love, I am so very thankful to have shared these last 15 years with the greatest teammates and fans in the best sports city in the world," Rask added. "We have shared so many special memories over the years -- bringing the Cup back to Boston in 2011, our runs to the Final in 2013 and 2019, playing overseas in the Czech Republic, Northern Ireland and China, and of course the Winter Classics. I am also so thankful that I was able to represent Finland on the world stage and win a bronze medal in the 2014 Olympics.

"While these experiences were all incredible, what I will remember most about all of them is the bond I had with my teammates, coaches and team staffs, the memories that we will always have, and the friendships that will last a lifetime.

"Through all the ups and downs, I am so grateful for all the support this team and the people of Boston have given me. I will miss everything that comes with representing the Boston Bruins. But now, I am excited to spend more time with my family and friends who never stopped supporting my dream. Boston is special for so many reasons and will always be our adopted home. We look forward to remaining a part of this amazing community.

"I especially want to thank the Jacobs' family, Cam Neely, Don Sweeney, my coaches, the equipment staff and the rest of the team support staff for all they have done for me throughout my time with the Bruins organization. I've never wanted to play for any other team. I'm so proud to have worn the Spoked-B for my entire career and wouldn't have it any other way."