Carter Hutton: Have Pads, Will Travel

Carter Hutton was a well travelled goaltender over the course of his career.

Hutton was born and raised in Thunder Bay, Ontario where his dad worked as a foreman and helped his son with hockey.

It was not an easy road for either, especially Carter. He played four seasons in the little known Superior International Junior Hockey League before heading south to play American collegiate hockey with the University of Massachusetts-Lowell for four more seasons where he also doubled as a business major. During all that time he was never drafted by a National Hockey League team.

Ah but NHL scouts were watching. The Philadelphia Flyers signed him for a season, then the San Jose Sharks, though he never actually played a game in the NHL with either organization (he did dress as a backup in Philadelphia a couple of times).

Chicago would sign him in 2011 but he continued to toil in the minor leagues. On April 27th, 2013 he was recalled due to an injury to Ray Emery. He would play his first NHL game - his only with the Hawks - against the St. Louis Blues that night, He dressed as the back up goalie to Corey Crawford for the last couple of games of that season as well as the first five games in the playoffs before Emery returned. The Hawks would win the Stanley Cup that spring. Hutton was given a Stanley Cup championship ring but because he did not play enough games that season his name is not engraved on the Stanley Cup. 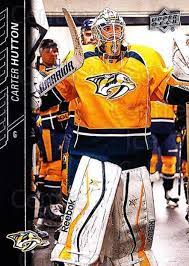 Shortly thereafter Hutton left the Hawks organization and signed with the Nashville Predators. It turned out to be the best move he could have ever made. He won the back up role out of training camp but soon enough found himself as the starting goalie as star netminder Pekka Rinne suffered a long term hip injury. Hutton really impressed with a 20-11-4 record. The rest of the league noticed and that stretch probably extended his NHL career by years.

The Predators rewarded Hutton with a two year, one way contract for $1.45m. That is like winning the lottery for a small town kid who had been eking by on minor league salaries. He didn't get to play much over those two years, as Rinne was healthy, but he was excellent in the tough role as back up goalie.

In 2016 Hutton signed with the St. Louis Blues. Hutton truly established himself as a premier back up goalie in St. Louis. He challenged Jake Allan to be at his best while appearing in 30 and 32 games over the next two years and posting strong save percentage and goals against average numbers.

The Buffalo Sabres decided to give Hutton his first real chance to be a NHL starter in 2018. Hutton really hit the jackpot this time with a 3 year, $8.25m contract. But the Sabres were a pretty weak team in front of him and he finished with an 18-25-5 record

Then something bizarre happened. His second season in Buffalo started terribly. After an early season stretch saw him go 0-8-4 it was discovered by doctors that he had a vision problem. I'd have to imagine it's hard enough to see a tiny piece of rubber coming at you at 100mph through a maze of bodies with perfect vision. Vision impairment would be a pretty big deal to a goaltender. Though he could have always worked as a referee I suppose.

Regardless, Hutton's tenure in Buffalo would go down as a bit of a disappointment. Through it all Carter Hutton kept a pretty level head about everything.

Hutton would sign with Arizona and Toronto late in his career. Because of the Covid pandemic Hutton barely played over the last couple of seasons in his career - just three games with the Coyotes. He was relegated to the taxi squad as teams were allowed to carry expanded rosters and third goaltenders during the pandemic. By this stage of his career he was also hobbled by a troublesome ankle injury.

By the way, Carter Hutton was of no relation to Ben Hutton who also played in the NHL in this era.