Dustin Brown captained the Los Angeles Kings to two Stanley Cup championships with his rambunctious, in your face style of hockey. He will go down in history as a hockey legend.

The native of Ithaca, New York chose to play in Guelph of the OHL rather than the US national development team route followed by college. Instead he excelled on the ice, as his first round (13th overall) draft selection in 2003 attests, and off the ice, as his three OHL Scholastic Player of the Year award suggests. He was also named as the top scholastic player in all of Canadian junior hockey in his draft season.

Brown was not a naturally dynamic scorer or the most skilled offensive player. But he could impact the game in a way that teammate superstars Anze Kopitar and Drew Doughty could not. 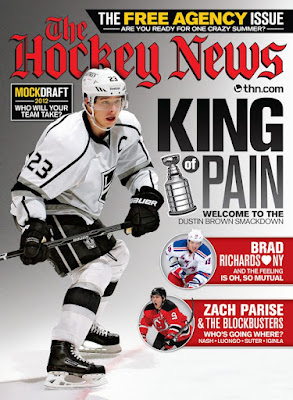 Brown, who could play either wing, was a rugged winger who really relied on his skating as his primary finesse skill. He had good speed and was so balanced and strong on his skates he was nearly impossible to knock off the puck. He had a forceful shot and a shoot-first mentality with a tendency to score in bunches.

But it was his physicality that really made him an effective player, especially as he matured. As younger player he was fixated on initiating contact every shift and every game. It would, not surprisingly, drain him of energy and make him less effective, though he sure drew a lot of penalty calls against the opposing team while doing it. But once he learned to be much more calculating and to hit with purpose he became one of the NHL's best.

The hard hitting power forward was at his very best in the spring of 2012, leading the Kings to their very first championship. That spring he and Kopitar led all NHLers in goals (8), assists (12), points (20), shorthanded goals (2) and Plus/Minus (16).  Brown also had three game-winning goals in the playoffs and a league best 93 hits. He became the first Kings player and second American born captain to ever lift the Stanley Cup. He was also named first star of the game in the Cup clinching finale.

The Kings would lift the Stanley Cup again two years later in 2014. Brown was now playing on the top line with Kopitar and newly acquired Marian Gaborik. He scored 14 points in 26 games, but most of his contributions to the second championship were not quantifiable by any traditional hockey statistic. That was best underlined with his Mark Messier Leadership Award win that season.

Brown would continue playing with the Kings for the rest of his career, retiring in 2022. He scored 325 goals, 387 assists for 712 career points. He would relinquish the captaincy to Kopitar in 2016 but you know he was still very much a team leader.

Dustin Brown's #23 will undoubtedly be retired and he will forever go down as one of the all time great Los Angeles Kings' players. But is that enough to get him in the Hockey Hall of Fame?

Brown was instrumental in two Stanley Cup championships and is a franchise legend. His career numbers are underwhelming by Hockey Hall of Fame standards. If I had to bet I would think that Brown will one day get into the Hockey Hall of Fame, with similar debates for Kopitar, Doughty and Jonathan Quick also to come when they become eligible.