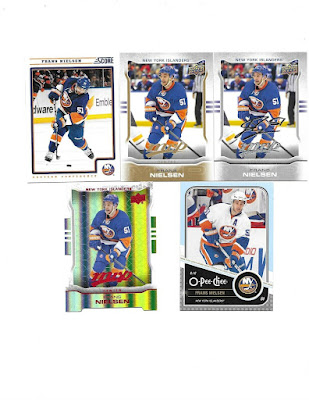 As of this writing there have been 17 players from Denmark to play in the National Hockey League. Sixteen, really. 1970s NHL/WHA player Poul Popiel was born in Denmark but grew up in Canada since his youth.

Who is the greatest Dane to play in the NHL is a good question.

Frans Nielsen played in 15 NHL seasons and appeared at nine World Championships and one Olympics. He leads all Danes in career totals such as games played (925), goals (167), assists (306) and points (473).

Dismissing Popiel from the equation, Nielsen was the first born and raised Dane to make it to the NHL. Drafted 87th overall by the New York Islanders in 2002, Nielsen, who played his junior hockey in Sweden, played 10 years with the Islanders and five years with Detroit. He was definitely one of the more underrated players of his era.

He was a very heady hockey player, really understanding the flow of any given game and how he could best impact it. He was an excellent skater and when combined with his hockey sense, he was an effective forward. He was a solid playmaker offensively and a very conscientious defensive presence.

For now he will rank as the top player ever to come from Denmark, though young Nikolaj Ehlers will challenge for the top within time. Let's also give mention to Lars Eller, Jannik Hansen, Mikkel Bodker and goaltender Frederik Andersen.