Nate Prosser was one of those unheralded defensemen who you might not know much about, especially if you do not follow the Minnesota Wild very closely. 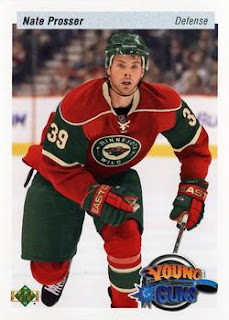 Prosser played almost his entire career with his home-state Minnesota Wild. He was an undrafted graduate of Economics of Colorado College who signed in 2010. The Elk River born Prosser played all but 7 of his 360 career games with the Wild.

Playing pro is every young hockey player's dream, and achieving that dream with your favorite team is even more amazing.

"I definitely have to take a step back a lot of the time and pinch myself. I know I’m truly blessed with where I’m at and all of my family and friends are still in the local area here and I’m truly thankful to be a part of this organization. When I graduated from college I was so happy to be heading to the Xcel and being able to play in front of my friends and family…the sense of pride I had to be playing for the hometown team…words can’t even describe it."

As a pro Prosser was a solid depth defender and great teammate. He blocked way more pucks than he ever scored, and answered the bell bravely every time. I do recall one skirmish with Colorado's Gabriel Landeskog most famously.

Let's let his former coach, Mike Yeo, explain what type of player he is.

Prosser very much knew his lot in life in the NHL.

"Every game I played was a try out," he famously said.

It's such a great quote because it is so true for a player of Prosser's stature. There's no big, long contracts. No guaranteed roster spot from one night to another. He had to be ready every chance he got into the lineup and play well enough to stay a little longer.

He kept doing that night in and night out for 11 NHL seasons, far longer than most players.