I almost think people forget how good PK Subban was.

Perhaps that's because once he left Montreal he played in relative obscurity in Nashville and New Jersey. Injuries limited his swashbuckling playing style over time. And, of course, there is his famous although sometimes divisive personality - a personality that will make him a hit on TV and his many other ventures in life off the ice - that he seemingly became known for more than for his play on the ice. 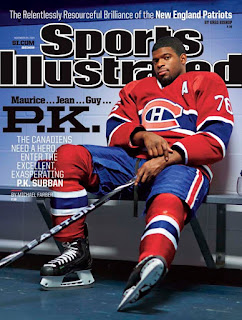 But I will always choose to remember PK Subban with the Montreal Canadiens. He was the young defenseman who exploded on to the scene in Montreal during the 2010 playoffs. By 2013 he was named as the NHL's best defenseman, winning the Norris Trophy. He starred in the playoffs in particular, especially that 2013 series vs Boston. In seven seasons in Montreal he endeared himself to the Montreal faithful in a manner that is reserved for only the true best in hockey, and that's what he was.

And his best reached beyond the ice. He created a charitable foundation that raised $10m for the Montreal Children's Hospital. He continued to support the hospital years after he left the city.

His departure from Montreal was shocking though not unexpected. He had just signed a mega-extension but his game was prone to mistakes as he took to the ice with a riverboat gambler attitude. And the Canadiens did get Shea Weber in return from Nashville, a more than adequate replacement, at least when healthy. It was quite the trade at the time.

But rumour has always had it that his dominating personality became too big for the locker room and he was dealt because of that. Locker room dynamics are a part of the hockey team equation us hockey fans never truly understand, so who knows if it was true. But hockey is an old school world where players are expected to be humble and quiet, not outlandish and unreserved. For whatever perceived downsides of his dominating demeanor existed, PK was always thoughtful, honest and intelligent. He was always himself and never turned the volume down, rightly or wrongly.

PK, who also won two world junior championships and an Olympic gold medal in 2014, will be remembered as a player who always played better in the game's biggest showdowns.

He would play three years in Nashville and another three in New Jersey but he never was quite the same player once he left Montreal.

I'm sure there are those who would say Montreal has never been the same since PK Subban left town, either.