For those who got to witness Yvan Cournoyer apply his trade live and in person knew they were seeing something special. One of the best skaters and stickhandlers ever to grace a sheet of ice, Cournoyer played with an affection for the game of hockey that was as obvious as it was rarely matched. 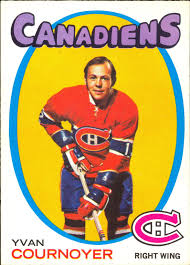 Yvan joined the Montreal Canadiens during the 1964-65 season and by the time he retired in 1979, he had run up an impressive array of offensive statistics. He scored 25 or more goals 12 consecutive times in his career which was marked with consistency and championships.

But in his first years Yvan was used exclusively as a power play specialist. As a rookie he scored seven goals in 55 games. In his second year (1965-66) Yvan scored 16 of his 18 goals on the PP. The following season he scored 20 of his 25 goals with the man advantage. Yvan eventually scored over 150 power play goals during his NHL career.

Toe Blake, then coach of the Canadiens, wasn't satisfied enough with Yvan's defensive skills to give him a full-time job.

The French faithful didn't understand why Blake didn't play him more. They were constantly chanting "We want Cournoyer".

Blake would stalk behind the bench, his eyes blazing in anger.

"Why don't they let him alone?" he would snarl. "They're putting pressure on him and they're hurting him. They're hurting the team."

Blake was trying his best to keep the pressure off the young Yvan.

Earlier Blake had sent him down to AHL for a seven game stint which made a deep impression on Yvan.

"I knew then that the only place to be was with the big team," Cournoyer said. "I guess I always knew that, but it had never occurred to me that I might not be a part of it. When I got back, I said to myself, 'Yvan, this is the only place to be and you are going to work hard to be here.' Maybe it was then that I started to mature. Toe kept harping at my defensive play, and I kept working on it"

His best years were in the 1970s, when he had two forty plus goal seasons. Perhaps the finest moment in his career came in the playoffs in 1973, where he scored 15 goals in 17 games and was the recipient of the Conn Smythe Trophy, which is awarded to the MVP of the NHL's playoffs. The six time all star would taste sweet champagne from Lord Stanley's silver chalice an incredible 10 times in his career.

Despite his small size physically, Cournoyer was one of the strongest and most uncatchable skaters of all time. Nicknamed "the Roadrunner", Yvan's explosive acceleration on the ice often actually worked to his physical disadvantage at times.

"I played on my speed," Yvan once explained. "When you do that, injuries have got to happen. Imagine if you had a car that you only ran at full speed or a racehorse that you raced every day. If you're going at 100 percent all the time, something has to give every so often."

Yvan was not only fast but was also an impressive stickhandler, and had a booming slap shot that was deadly accurate. Yvan was actually a pretty tough player and was never intimidated by bigger stronger players.

"I was never the kind of guy who was going to hit first. But if a guy dropped his gloves I didn't back down."

That of course didn't happen very often since Yvan recorded only 255 penalty minutes during his NHL career, an average of 17 minutes per season, and had only 47 minutes in his 147 playoff games.

Yvan was a great leader and would be the Canadiens captain during their glory years of the late seventies. He wasn't a vocal leader but he let his on ice performance do the talking.

"It was certainly an honor to be named the captain. I was never a vocal leader, a guy who yelled or gave advice. I guess my teammates looked at me as the veteran and that they felt my experience would make me a capable captain," Yvan said.

Those qualities of speed, skill and leadership were very evident in the Summit Series against the Soviet Union in 1972. Yvan made several clutch plays.

In the second game of the series Yvan went on to score a dazzling goal, leaving the Soviet defenseman flatfooted and in shock as he raced in from his wing to beat Vladislav Tretiak. It turned out to be the winning goal.

Yvan remembers the play very well and still jokes that the Soviet defenseman must have caught a cold given the fact how fast he flew by him.
In the crucial eighth game, he scored the tying goal midway through the third period paving the way for Henderson's dramatic series winning goal late in the game.

In the 1975 Super Series, the Soviet Red Army team met the Canadiens on New Year's Eve in what was considered one of the greatest games of all time. Yvan played great that night, scoring one goal and setting up another. Had he been more lucky he could have scored a couple more. The Red Army defenders tried desperately to keep up with the Roadrunner during the game. Not surprisingly, he was named one of the game's three stars along with team mate Peter Mahovlich and Red Army goalie Tretiak.

Yvan was still flying when a back injury would fell him during the 1977 season. Yvan had an operation on March 14,1977 to remove a disc from his lower back. He returned in 1978, but it was clear he had lost some of his speed, which limited his effectiveness. He would be sidelined again with back problems in 1979. He seemed to be the Roadrunner of old when he returned for the 1979-80 season, but he found the pain in his back re-occurring and decided to retire rather than risk more permanent injury.

Yvan Cournoyer is considered to be one of the best right wingers of the seventies. In 16 seasons of play, Cournoyer established himself as one of the premier forwards in the NHL, scoring 428 goals and 435 assists in 968 games.

I had a passion for hockey & the Montreal Canadians from when I was a small girl, watching every Saturday & Wednesday with my dad. There were only 6 teams back then. Yvan was spectacular to watch!! I had the pleasure of meeting & having my picture taken with him in Winnipeg when the 72 Summit Series Tribute Tour came through town. What an honour that was. I had some old newspapers articles from when The Habs won the Stanley Cup back in the 60 & 70’s. Yvan was so amazed by them he called the photographer over & asked if HE could have his picture taken with me. Like I said “What an honour that was!!!” Such a gentleman & sweet man! Thank You so much!!!
Lois Reid