We seem to be on a streak of looking back at recently retired players. Let's continue on with a look back at Keith Yandle.

Unlike this week's fellow retirees Zdeno Chara and PK Subban, Keith Yandle was not nearly as flashy or overly well decorated defenseman. He was more of a hockey player's hockey player (once dubbed the NHL's best teammate), the type of guy you could count on night in and night out.

Night in and night out is no exaggeration. He retired as the NHL's all time iron man having played 989 consecutive games in a 16 year career spanning 1109 career games (plus another 58 in the Stanley Cup playoffs).

Best known as a blue liner with Phoenix/Arizona and later with Florida, he also had brief stints with the New York Rangers and Philadelphia Flyers. He was a strong skater and had a heavy point shot that made him a mainstay on the power play unit. He was an underrated passer as well. He scored 103 goals and 516 assists for 619 points in his career.

Yandle was not a noted physical player and could be prone to some sloppy giveaways under pressure, but was a very skilled player who learned to be an effective scoring threat. His shot was always first rate, heavy and on net. He aggressively would pinch into the offensive zone, learning to exploit his skating ability. He could headman the puck with strong passes out of the zone.

That's how we will remember him on the ice. But anyone who ever played with him will remember him for his free spirited nature. Time and time again former teammates called Yandle the funniest guy they've ever met. They loved him which allowed him to be a leader in his own way.

"The young guys all want to be like him and the old guys just want to hang around him. It's an uncommon characteristic," said long time Coyotes teammate Shane Doan. 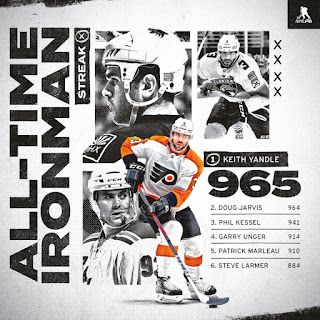