I saw Nathan Gerbe's name on the transaction wire as having officially retired on September 14th, 2022. It caught me by surprise, and like most of you I thought he had retired long ago. He had last played a minor role with the Carolina Hurricanes in 2016, and then seemingly disappeared. In reality he was still playing, in Europe and then the minor leagues, while appearing almost unnoticed in 41 NHL games with Columbus between 2016 and 2021.

Gerbe was best known for playing in Buffalo and Carolina, but there is famous photo proof that he played in Columbus: 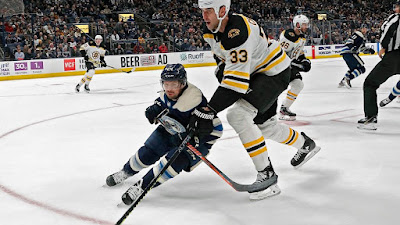 Ah yes. That photo. No, it is not photoshopped, even though Gerbe jokingly insisted it was on his Twitter account. It is a picture of Gerbe, said to the smallest skater in NHL history, battling with Zdeno Chara, the largest player in NHL history.

You can not talk about Gerbe without mentioning his size, or lack there of. Said to be just 5'4" tall, only long-ago goaltender Roy "Shrimp" Worters played in the NHL at a shorter height (5'3"). But no skaters.

Gerbe didn't just appear in a few games either. He played in 11 NHL seasons, totalling 435 contests, scoring 63 goals, 88 assists and 151 points. He was a standout when he played in Switzerland and a AHL all star in the minor leagues.

But he is a hockey legend at Boston College. He played three seasons at BC, before leaving early to turn professional. In 2008 he led the Eagles to the Frozen Four championship while being named as the tournament's outstanding player and a finalist for the Hobey Baker Award as the top player in all of college hockey.

“It’s been unbelievable, I’m so fortunate to have gone there and be a part of the winning culture there, and to have played under Gary York, learning so much from him that I have been able to carry with me to the next level.”

That 2008 season really opened up his chances at playing in the NHL, too.

it was in college that I learned I’d have a really good chance if I continued to work hard and develop. That’s what I tried to do.”

Gerbe was rewarded when he skated with the Buffalo Sabres in the 2010-11 season. The rookie scored 16 goals and 31 points and gained a reputation as a spunky, dynamic winger. He had a great shot but it was his tricky skating ability that gave him an edge. He made explosive turns and directional changes that bought him room that his lack of stature could not. In fact, his effectiveness in the dirty areas saw him deployed as an energy checking forward with an offensive upside.

Injuries sidelined Gerbe in 2011-12 and then he was not protected by the Sabres coming out of the 2012 lockout. That's when the Hurricanes gave him a shot.

The Carolina organization has been nothing but fantastic to me and very supportive. For me it’s been to come in and learn the system and do my best to positively fit in and be a team player.”

Gerbe fit in nicely, again recording 16 goals and 15 assists in his first season, and a 10 goal, 28 point season the year after before beginning to disappear.

So what advice does the NHL's smallest skater have for kids dreaming of playing in the big leagues?

“Just never give up. I think the only time that people don’t accomplish their dreams is when they quit. Failure and not being scared of it helped me to achieve that.”