I saw Zdeno Chara before most. 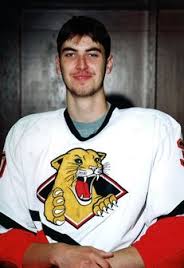 I saw him as a rookie in the WHL with the Prince George Cougars in 1996-97. Coming over from his native Slovakia, it was his only year of junior hockey in Canada. He had just been drafted that summer by the New York Islanders, 56th overall, so he wasn't unknown by any means. Most hockey fans knew of him because he was an intriguing oddity given that he was a six foot nine defenseman. In those days the NHL was still dominated by hulking monsters on the back end, monsters like Scott Stevens and Chris Pronger and Derian Hatcher. Chara was the bigger than all of them.

Coming to the Western Hockey League is not the easiest path for any hulking prospect who thrived at the physical game. The "Wild, Wild West" has long been a league full of hard nosed kids looking to make a name for themselves, and often the easiest path to the top of that ladder was to take on the biggest and baddest.  Chara entered the league with a huge target on his back simply because he was so big. Yet he was seen as a target because he was awkward and gangly 19 year old, still growing into his frame. Let alone the fact that he was a Slovakian teenager coming to a cold and very blue collar town of Prince George. It could not have been an easy transition.

Chara had help in the form of some interesting Cougars teammates. Ronald Petrovicky, future Calgary Flames winger and more importantly Slovakian countryman, had been in PG for a couple of years already, and had to have smoothed over Chara's transition immensely. Future NHL notables Joel Kwiatkowski and Eric Brewer were big parts of the blue line. They had Chris Mason in nets.

The town adores the Cougars, and though he only played 49 games (plus 15 more in the playoffs), Chara was something special. He even stayed in the northern town in the summer after his only WHL season to train, work on his English, and take a job washing cars. That's the type of work ethic that endears a player to the hard scrabble town of PG.

On the ice it was obvious Chara had the toolkit to work with his size that made him such an interesting prospect. He could skate well, make strong plays with the puck and was positionally solid. Throw in that long wing span and excellent stick checking skills, and he would come to dominate the defensive zone.

I don't know how many times Zdeno Chara had to fight in Prince George. HockeyFights.com only has his playoff totals, where he had 45 minutes in 15 games, including three fights including two against Seattle tough guy named Tony Mohagen. Chara handled himself obviously, despite having never truly having to fight on the ice until he came to Prince George. More importantly he was allowed to progress to the minor leagues and NHL because of his playing ability more than his obvious ability to fight and he went on to one of the greatest careers in the history of hockey.

I would continue to follow Chara's lengthy career with special interest because of his Prince George connection and because he would become such a dominant, Hall of Fame worthy player. He was so very unique and there is nothing I like more than a rare and different player who excels at the game in a way we don't usually see.