The Story Behind The Quesnel Kangaroos Name 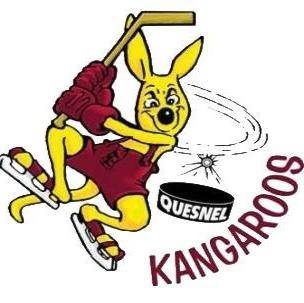 Picturesque Quesnel, British Columbia, south of Prince George and north of Williams Lake, was established as a gold rush town, much like nearby and more famous Barkerville. It quickly became and largely remains a forestry town.
It has always been a hockey town. Quesnel born NHL players include Bob and Brad Gassoff, Brad Festerling, Errol Rausse and Aaron Gagnon. More notable names like Carey Price, Sheldon Souray, Gilbert Brule, Link Gaetz, Terry Ryan, Trevor Smith and Jamie Leach played junior hockey with the Quesnel Millionaires.
Quesnel hockey scene has long been associated with the name Millionaires. They are most notable on the junior hockey scene, in several different leagues, from 1975 through 2011, when the BCHL team left to become the Chilliwack Chiefs.
The junior scene resuscitated the name to the central BC hockey scene. The Millionaires named was used at the senior level going back to hockey's earliest days in the Cariboo region, though records seem to be missing. But at some point around World War II, the team name changed.
Millionaires made sense, given the city's gold rush days heritage. But they changed the team name to the Kangaroos! The Kangaroos?! Yes, the Kangaroos!
Kangaroos is a fantastic name, but trust me, Quesnel has never seen a kangaroo unless it's in frozen patty form in a specialty meat shop. So how the heck did the hockey team get the name Kangaroos?
Paul Gauthier, a long time Quesnel resident, owner of the local theatre and former manager of the hockey team, told the Quesnel Observer newspaper the story of the Kangaroos name origins back in 2012. 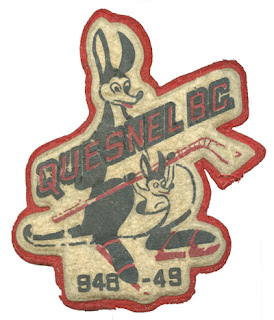 It turns out the Millionaires, likely in the 1940s, needed some new team sweaters. Of course back in those days players would wear the exact same sweater from game to game, and from season to season. As you can imagine, the sweaters would get pretty tattered back in those days.
But the Millionaires weren't actually very wealthy at all. But they did find a friend named Arnie Hasselgren, owner of the Quesnel Hotel. Hasslegren had recently won $50,000, but with a catch. The money was won in an Australian lottery. He could not take the money out of the country, so he offered to use some of it to buy hockey sweaters, or what would suffice as hockey sweaters anyway, in Australia and have them shipped to Quesnel. The only catch was the sweaters would have a kangaroo on them. Hence why they decided to change the name of the whole team at the time.
Photos courtesy http://www.quesnelexhibits.ca/
at January 06, 2022