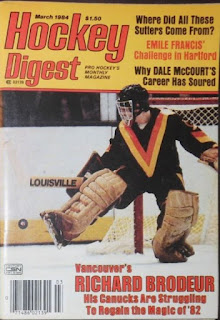 His statistics are unimpressive, downright awful in some cases. But Canucks fans, and for that matter early Nordiques fans, can tell you that the stats are not truly indicative of "King" Richard Brodeur's stellar play.

Brodeur played most of his NHL career in the early to mid 1980s. Those years featured horrible Canuck teams in the same division as Wayne Gretzky's high scoring Oilers, Lanny McDonald's Calgary Flames, Marcel Dionne's LA Kings and Dale Hawerchuk's Winnipeg Jets. That's a whole lot of offensive firepower gunning at the poor Canucks, who relied on Brodeur to keep them in most games, and sometimes just to keep the score respectable.Brodeur was, literally, the Canucks saving grace. He was an exciting goalie to watch, pretty acrobatic and had lots and lots of shots against. His career 3.85 GAA his grossly inflated by the high scoring Smythe division of the 1980s. His win/loss record is very respectable considering how bad the Canucks were in comparison to their divisional foes.Brodeur's career highlight, like that of most Canucks and their fans of that generation, was the improbable 1982 Cinderella run to the Stanley Cup finals. Brodeur backstopped the Canucks with an 11-6 record and a 2.70 GAA.
Full Richard Brodeur Biography
at November 24, 2022