The Pugilistic Exploits of Hockey's Most Gentlemanly Player

Leonard "Red" Kelly very well might be the most underrated superstar in National Hockey League history. 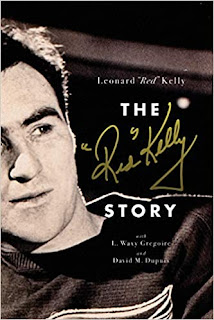 You might be asking yourself how can this be? He's an 8 time Stanley Cup champion who starred with 2 different dynasties He's an 8 time all star who won the Lady Byng trophy 4 times and the Norris trophy once. He's and a battle proven veteran of over 1300 NHL games that was named as the 22nd greatest player of all time by The Hockey News at the dawn of the 21st century. He starred at both center and defense, and even served two terms as a Member of Parliament in Ottawa while playing in Toronto.
If you had only one word to sum up Red Kelly it would gentleman. He took just 327 minutes in penalties in a 1316 game career. Much of his career was playing defense in the rough and tumble Original Six days where clean defensive play was certainly a rarity. Yet he excelled.
But did he ever get into a fight?
On December 30, 1954 he lost his temper with Toronto's Eric Nesterenko, a hulking forward Kelly admitted he didn't always appreciate. It must have been one heck of a fight! Kelly, the reigning Lady Byng Tropy winner, was assessed an astounding 22 minutes in penalty for the altercation - a minor, two majors and a misconduct. That one exchange saw him take more penalty minutes than he took in all of the eight previous seasons combined! And he only took 3 minor penalties the rest of the entire season. 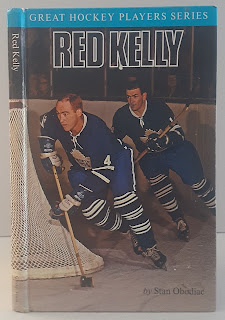 In 1955-56 he was assessed another 5 minute major penalty, the only other such penalty of his career that I can find. That wasn't a fight, though. He accidentally elbowed Boston's Leo Labine, leaving the Bruin badly leaking blood from the face.
Here's a full biography of the great Red Kelly.
at November 14, 2021