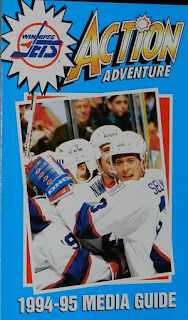 When he broke into the league, he was the machine gun goal scorer and skater so fast he was nicknamed the Finnish Flash.By the end of his career he was hobbled by many injuries including reconstructive knee surgery but he finally would become known by the label he wanted to be remembered by: Stanley Cup champion.Teemu Selanne was selected 10th overall by the Winnipeg Jets in the 1988 Entry Draft but he didn't come over to North America until 1992-93. He remained in Finland playing for Jokerit while serving his mandatory military duty. He also spent 3 years doubling as a kindergarten teacher. No, I'm not kidding.Selanne was well worth the wait for Winnipeg fans though. More mature than most rookies, he rewrote the NHL rookie record book in 1992-93. Playing on a line with Keith "Walt" Tkachuk and Alexei "Archie" Zhamnov, Selanne scored a league leading (tied with Buffalo's Alexander Mogilny) 76 goals, in the process smashing Mike Bossy's previous rookie record of 53 goals. He also registered 132 points, destroying Peter Stastny's old rookie mark of 109 points. Not surprisingly, Selanne won the Calder Trophy as the league's rookie of the year.