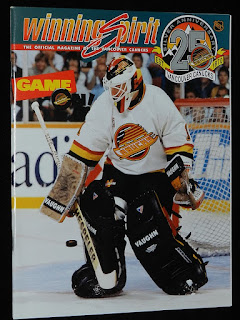 In less than one season Roberto Luongo pretty much everyone agreeing he is the greatest Canucks goaltender of all time. There is little doubt that "Bobby Lou" is truly something special, but my favorite Canucks goaltender of all time remains Kirk McLean.Utilizing his big size, Captain Kirk was one of the last classic stand up goalies to succeed in the National Hockey League. Canucks radio colour commentator Tom Larscheid described him best: "He's like one of those bubble hockey goalies, always standing perfectly straight and just letting the puck hit him."His stand up style was ideal for his big frame, although in some ways his style made him unappreciated. While other goalies were acrobatically turning away pucks, "Mac" made all saves look routine by just getting in the way of it and making sure the rebound was under control. To the novice fan it looked routine, even boring, but to the hardcore fan it was a pleasure to watch one of the last great stand up goalies.