Stephen J. Nesbitt has a fantastic piece on Briere's life, death and legacy at The Athletic. Yes, it's behind a pay wall but I do recommend subscribing.

Briere's car accident and death is something I have known about for a long time. But I did not know that another young NHL star was in a scary car accident the day before Briere's.

Bobby Clarke, the emerging leader of the Philadelphia Flyers, was back home in Manitoba and somehow managed to flip his car into a swamp. 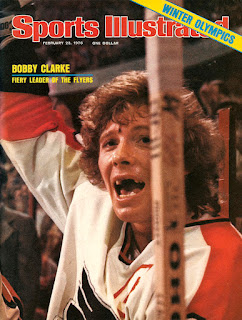 That spring, shortly after returning to Flin Flon, Clarke was in an automobile accident. Though no one was injured, it had a profoundly sobering effect on him. Clarke admits he was playing the NHL hotshot. "I was driving along with three girls in my big new car with the big engine one night," he says. "We'd had a few drinks, and all of a sudden I hit the gravel on the side of the road, the car flipped and I found myself on the roof."

The very next day Pittsburgh's Michel Briere, whom Clarke had beaten out for Rookie of the Year honors, lost control of his car on a Quebec highway, was hurled through the windshield and, after several months in a coma, died. "It made me think about a lot of things in a different way," says Clarke.