Finally something to celebrate? 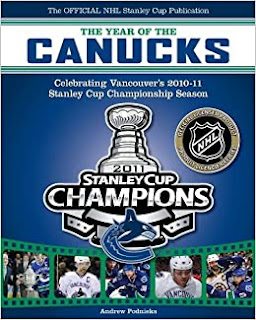 This isn't a fake book. It was never published, obviously. But if there was ever one single hockey book I ever wanted, this would have been it.

I saved this image from the Amazon listings a decade ago. The NHL wanted the championship book out as soon as possible after the Stanley Cup was handed out, so they listed two books - one for Boston and one for Vancouver - before the series was even decided. That way fans could pre-order.

This past week the Hockey Hall of Fame inducted the class of 2020. 2021 was postponed to 2022, thanks to Covid. Which is unfortunate, though it does allow for a unique opportunity for Canucks fans to celebrate. And Jesus, Joseph and Mary do we ever need something to celebrate.

When the Hockey Hall of Fame inducts players in 2022, three first year eligible players will include Roberto Luongo and Daniel and Henrik Sedin. It somehow seems fitting for all three to go in to the Hall of Fame together, no?

Maybe the will finally add Alexander Mogilny too.