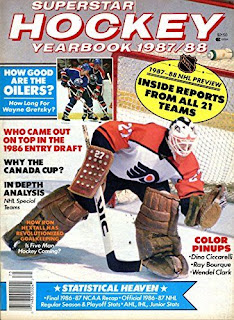 With his masterful stickhandling, goaltender Ron Hextall helped revolutionize the game of hockey.Ron Hextall's career started out like gangbusters. As a rookie he challenged Grant Fuhr for top status as the games best goalie in the late 1980s. He was incredible and made the Flyers a true Stanley Cup threat. Over time Ron's play leveled off to the point where he continued to play solidly, but was a victim of his own early success.Hextall should be remembered as one of the most exciting goalies to watch play. He excited fans in a way that Dominik Hasek or Tony Esposito did. Fans will also remember Hexy for his uncontrollable temper. He set an NHL record for goaltenders with 113 PIM in 1988-89. Memorable skirmishes with Edmonton's Kent Nilsson and Montreal's Chris Chelios always stick out in the minds of many hockey fans.