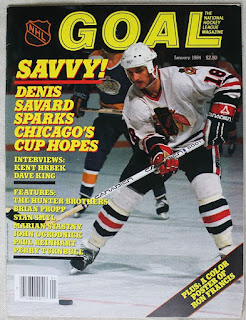 Denis Savard was one of the most electrifying players in the history of hockey, and almost certainly the most exciting of his era. That is quite a claim considering Savard played in an era that boasted the likes of Wayne Gretzky and Mario Lemieux. The Great One and Super Mario left crowds wowed and thinking "Did I just see that?!" but they couldn't pull the fans out of their seat quite like Denis Savard.Savard was one of the quickest players in the league, with tremendous one step acceleration. He was so fun to watch as he'd dart in and out of danger, rapidly change directions, and even perfect the "Savardian Spin-a-rama" in which he'd do a full 360 degree turn while carrying the puck to protect it from checkers. His great skating was complimented nicely by his incredibly soft hands. He could stickhandle through an entire team and was an excellent playmaker. He was also a very good shooter, particularly with his laser-like wrist shot. He was also known for taking bad angle shots. He was a puny player in terms of size but he had a solid center of gravity that made him tough to knock off the puck if you were lucky enough to catch him.