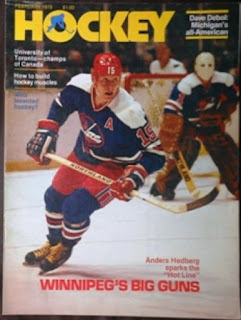 When you think of Anders Hedberg, you have to think of Ulf Nilsson at the same time. The explosive scoring duo came to the World Hockey Association's Winnipeg Jets shortly after Borje Salming and Inge Hammerstrom arrived in Toronto with the NHL Maple Leafs. They all became the first Swedish born players to achieve superstar status in North American hockey.Upon arrival in Winnipeg, Nilsson and Hedberg were almost immediately teamed up with The Golden Jet - Bobby Hull. Thus, tons of attention was poured on these two Swedish kids. And they didn't disappoint. In fact, they help Hull achieve mind boggling statistics while playing an exciting brand of hockey previously not seen in North America. Many look back it at it now and call it "Edmonton Oiler Hockey" only a few years earlier. Like Gretzky's Oilers, Nilsson, Hedberg and Hull loved to run and gun.