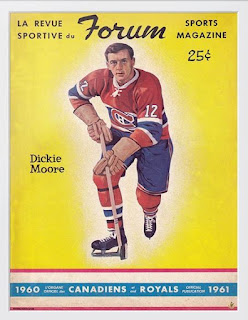 In Montreal, no person is more revered than Maurice "Rocket" Richard. That's why when a scout proclaimed Dickie Moore would make fans forget about the Rocket, Hab management eagerly listened.

Although hampered by injuries such as knee operations, shoulder separations, broken hands and wrists and countless bruises, scars and wounds, he twice led the league in scoring. In fact in 1959 he recorded 96 points to set a new NHL record for points in a season. This feat is made more amazing in the fact that he played much of the season with a specially designed cast on his injured shooting wrist!

His toughness came to no surprise for those who knew him since he was a toddler. Growing up in blue collar North Montreal, Dickie first established a reputation as tough-as-nails when he was hit by a car. Injuries to his knees and leg threatened his hockey career, but Moore stubbornly was determined to achieve the only dream he ever had - to play in the NHL. Although he was not a Habs fan growing up - he cheered for Gordie Drillon and the Toronto Maple Leafs.