Rod Gilbert overcame a serious injury to not only become a legend of the ice but to become one of the brightest stars on Broadway.

During a junior game, Gilbert skated over a piece of debris on the ice and suffered a broken back. He had two operations to correct the damage from the injury and he almost lost his life as a result of the surgeries. 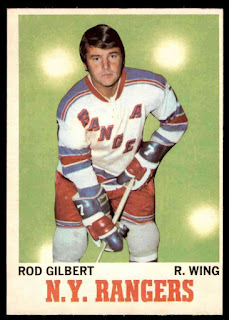 "During a home game I tripped over a cardboard lid from an ice cream container and wound up breaking my back," said Gilbert in Stan Fischler's book Heroes and History. "From that point on I went through hell - trips to the Mayo Clinic, spinal fusion and doubts that I'd play again - but the Rangers stuck with me. They provided me with the best of care and eventually, I was on the road to recovery. The Rangers, by this time, had figured that I could be an important player for them during the 1960s and my junior record showed why they had such faith," said Gilbert

Indeed it did. He played 4 years with the Guelph Biltmores, and in his final season scored 54 goals and 103 points in just 47 games!!

Gilbert persevered through the freak injury and reached his goal of playing in the NHL with the New York Rangers by 1962-63. For his persistence he would be given the Masterton Memorial Trophy late in his career.

His start actually happened in the spring of 1962. Forward Ken Schinkel had broken his toe and was unable to continue in the Rangers playoff series with the Maple Leafs. Gilbert was called up and played on a line with Dave Balon and Johnny Wilson, and impressed with 2 goals, both in his first game, and 5 points in 4 games, although the Rangers would ultimately lose the series. Gilbert's postseason impression though was enough to keep him in the city that never sleeps for the next 18 wonderful years!.

Gilbert teamed with Jean Ratelle and Vic Hadfield to form that GAG (goal a game) line, one of the most feared threesomes in hockey history. Gilbert and Ratelle had played together since they were 10 years old. Gilbert lived next door to the esteemed Brothers of Sacred Heart school where Ratelle, a gifted student, was enrolled. Playing shinny and keep-away on the frozen ponds of the school grounds, the two immediately formed a friendship and hockey tandem that was clearly something special.

"When I first saw (Ratelle) on the ice, I said, 'You play with me all the time, okay?' We started playing peewee and played in the finals at a tournament in the Montreal Forum when we were twelve years old," recalls Gilbert with a grin.

The Rangers were impressed by Gilbert at the early age of 14.

A man named Yvon Prud'homme invited me to play senior hockey with men in their late-twenties. We played for the Allan Cup. I was just fourteen. This man, Yvon Prud'homme, had been hired by the New York Rangers to start a competitive Junior B league in Montreal. When he signed me, I told him, 'I have a friend I've been playing with since I was a kid and he's better than me. Sign him up and we'll play together.' He signed Jean Ratelle without ever seeing him play."

Clearly it was the best thing that had happened in Manhattan's hockey landscape since the days of Lester Patrick and Boucher and the Cook brothers.

"When I got to New York, the Rangers were in last place. We were re-building," states Rod

But soon the franchise began to make some pro-active moves. Andy Bathgate and Don McKenney were traded to the Toronto Maple Leafs in 1964-65, bringing Rod Seiling, Arnie Brown, Bob Nevin and Dickie Duff to Broadway. Later, Emile Francis secured Eddie Giacomin for goal. The team drafted Brad Park, too. Then, Gilbert and Ratelle found the winger they needed to form one of the most explosive forward lines in NHL history - the GAG Line (Goal A Game).

"Jean and I needed somebody to go to the front of the net and hold his ground. Emile Francis decided that Vic Hadfield was the guy. Vic had a very short fuse. He was a tough guy; very robust. He established himself well in front (of the net) and could shake himself loose from the defense. The two of us (Ratelle and Gilbert) got him the puck and he scored fifty goals one year (1971-72). By being in front and yelling for the puck, Vic developed really good scoring skills." 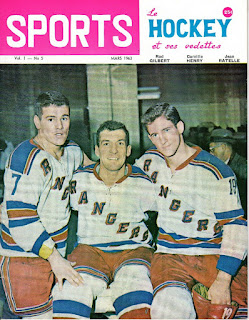 In 1971-72 the Rangers reached the Stanley Cup final, Gilbert's one and only shot at a league championship. However Bobby Orr's Boston Bruins were too powerful for the arch-rivals from New York.

"Boston acquired Phil Esposito from Chicago and this young kid that came out of Oshawa named Bobby Orr. They picked up Gerry Cheevers and soon Boston and New York were one and two in the standings," recalls Rod. "We were supposed to win the Stanley Cup in '71, '72 and '73. We had a really good team but Bobby Orr made the difference between the two of us. Boston won two Cups instead of the Rangers. What a rivalry we had! We were very close in talent."

That 1971-72 season was magical for the GAG line. Vic Hadfield topped the 50 goal mark, while Ratelle and Gilbert most likely would have as well, but both were felled with injuries late in the season, causing them to miss time and the magical 50 goal mark. Imagine that - all three members of a forward line scoring 50 goals!

"That was the best team I ever played for and it showed. Jean Ratelle led in scoring even though he played in only 63 games. Vic Hadfield was second on the club and we were strong up and down the line, from Eddie Giacomin and Gilles Villemure in goal, to Brad Park, Dale Rolfe and Rod Seiling on defense. Fellows like Walt Tkaczuk, Billy Fairbairn and Peter Stemkowski gave us tremendous balance."

Gilbert was also member of Team Canada during the legendary September 1972 Summit Series versus the former Soviet Union. He helped his country win one of the greatest hockey series of the century.

"The biggest moment was when we won Game Eight. I made the play to Bill White to tie the score at three-all. And then we got the win and that was exhilarating, emotional and very satisfying."

"Yvan Cournoyer told me, 'I would give up all my Stanley Cups for that one experience.' Of all the Cups he won, that was his biggest thrill; his biggest accomplishment. That win with Team Canada in 1972 was my Stanley Cup."

Gilbert went on to compete for the Rangers until the 1977-78 season. Over his 18-year career, Gilbert recorded 406 goals, 615 assists and 1,021 points in 1,065 regular season games. In 79 playoff games, he collected 34 goals and 67 points. He set or equaled 20 team scoring records and when he retired in 1977, he trailed only one other right winger (Gordie Howe) in total points.

While the Stanley Cup is the goal of every hockey player, only a select few get to sip champagne from it. It was not in Rod Gilbert's destiny to win the Cup, but that in no way should diminish the contributions he made to the game of hockey.

"I would have loved to have played on a Stanley Cup winner; that's for sure. But I had my share of thrills and, in a lot of ways, I was very lucky guy considering my dream of making the NHL and being able to do what I did with all those back problems."

Elected to the Hockey Hall of Fame in 1982, Gilbert was a fan favorite in New York, and is often considered to be the greatest New York Ranger in the team's long history. Given the competition such as Frank Boucher in the early days and Mark Messier in the current era, that is a fascinating feat on its own.

"Rod Gilbert was our Wayne Gretzky, or our Bobby Hull, or our Rocket Richard," said Emile Francis.
at August 26, 2021