Jan Suchy: Hockey Legend You Never Heard of Passed Away This Week, Too

Sadly, there have been a lot of notable deaths in hockey recently. From 31 year old recent NHLer Jimmy Hayes to the three junior players in the car crash in Surrey, BC, to hockey legends Tony Esposito and Rod Gilbert.

Yet there was another hockey legend who passed away in the past few days, and almost no one noticed.

There are many early era European hockey legends who are completely forgotten about today, at least outside of their home countries. One such perfect example is Jan Suchy, a Czech hockey legend who passed away at the age of 76 on August 24th. 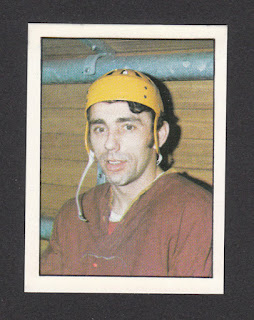 Sometimes referred to as the European Bobby Orr, Jan Suchy controlled games like no other European defenseman before him. His rink length rushes on the ice became legendary back home in Czechoslovakia. Suchy was one of very few defensemen who could get people out of their seats. Although he was a heavy smoker it never appeared to affect his fitness.

He was born on October 10,1944 in Havlickuv Brod. As a little kid he grew up playing hockey on a small frozen pond named Cihlar. There he shot around around with two other Czechoslovakian hockey legends, the Holik brothers Jiri and Jaroslav (NHL'er Bobby Holik's father and uncle). At the age of 7 they moved to the winter stadium in Kotlina that had natural ice. There they played under the supervision of Jaroslav Holik Sr. (Bobby Holik's grandfather).

Suchy first played real organized hockey at the age of 8 for the local team Jiskra Havlickuv Brod. He played there for 11 seasons (1952-63). After that Suchy went on to play for the army team Dukla Jihlava between 1963-79. During his 16 seasons in the Czech league, Suchy racked up 162 goals in 562 games, which made him the highest scoring defenseman in Czechoslovakian league history. He won the league title 7 times (1967-72 and 1974).

Never before had anyone in Europe seen a defenseman as complete as Suchy. He could do it all. He was a great skater who could set the pace of a game in the same fashion as a Bobby Orr. Suchy was virtually a fourth forward on the ice with his fine technique, vision and skating. He not only excelled offensively but did it defensively as well. Suchy was also a master shotblocker who never hesitated to throw his body in front of a shot. He got injured many times blocking shots. In 561 league games he scored 164 goals and 221 assists for 385 points. He also collected 351 PIMs.

He represented Czechoslovakia in international games 160 times, scoring 44 goals. Suchy was voted to the World Championship All-Star team four times in a row (1968-71). He won the first two "Golden Stick" awards in 1969 and 1970, given to the best player in Europe. In 1969 and 1971 he was selected as the best defenseman in the World Championships. Many thought that he should have been selected in 1970 as well, including the winner "Lill-Strimma" Svedberg.

When "Lill-Strimma" skated out to accept his award he immediately went over to Suchy and patted him on the back to tell him that the jury didn't know what they were doing and that Suchy and nobody else deserved the award.

"I have no idea if he understood what I had told him," said Svedberg later on. "But I've never seen a better defenseman in my life, and it only felt appropriate to tell him what I felt about it."

In 1971 a drunk Suchy behind the wheel was involved in a serious car accident that almost killed a couple of people. He was sentenced by a military court to 18 months in jail but was released earlier. He was also absent from the Czechoslovakian national team for a couple of years. He never was the same player after this incident.

Another interesting tidbit - Suchy was the first European star to be placed under a NHL protected list when the Boston Bruins claimed him as their prospect.

Special Thanks to Patrick Houda
at August 26, 2021