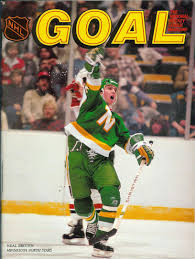 Minnesota is known as "The State of Hockey." With notoriously frigid winters and countless frozen lakes, ponds and streams to play on, hockey was as natural to Minnesotans as it was for Canadians. For the longest time, hockey in the United States was more or less affiliated with Minnesota. The life of smaller towns revolved around the rinks and ponds. High school hockey has as much interest as the pro game. And the college rivalries are as intense as any pro rivalry.Like many families in Roseau, Minnesota, hockey was a birthright for the Broten family. Neal and his brothers Aaron and Paul would all be state high school and college stars, and go onto the National Hockey League.But few would argue that Neal was not the best. In fact, in a state that has produced more hockey superstars than virtually every other state in the country, most consider Neal to be the best player the state has ever produced.