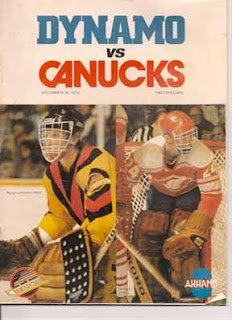 When you are the second best anything in your entire country, that is amazing. But for Vladimir Myshkin it was an unlucky situation. That's because he was the second best goalie in the Soviet Union in the late 1970s and early 1980s, behind the legendary Vladislav Tretiak. That meant Myshkin rarely got to play.

Internationally Myshkin was part of seven gold medals, two silvers, two bronze at the Olympics and World championships. He also was an important part of the Russians victorious team at the 1979 Challenge Cup tournament against the NHL All Stars (Myshkin posted a shutout in his only game in the best of three series). He also played well at the 1984 Canada Cup, his first major tournament as Russia's starting goaltender after Tretiak's retirement. Myshkin was named to the tournament all star team. He had a perfect 5-0 record before losing to Canada in an epic semi-final showdown.