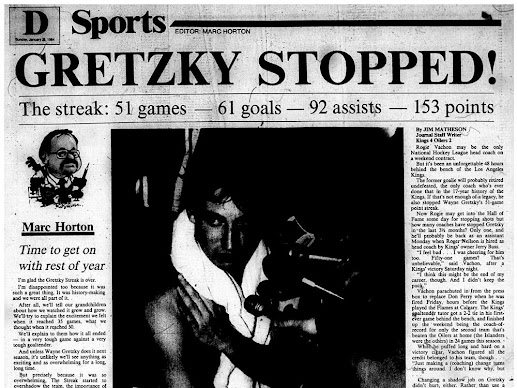 Trivia Time - Who surrendered Wayne Gretzky's first goal as an Edmonton Oiler? Here's a hint - it happened in the WHA. 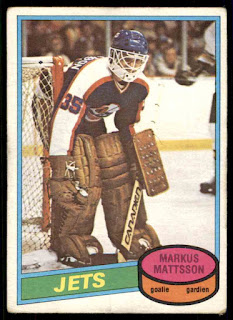 Winnipeg's Finnish goalie Markus Mattsson yielded the first goal to Gretzky as an Oiler. Gretzky scored 14 seconds into the 2nd period on November 2, 1978, his first game as an Oiler. Gretzky had just been acquired from the Indianapolis Racers who had to sell the junior phenom due to financial problems incurred by owner Nelson Skalbania.Mattsson got his revenge on Wayne in the NHL more then five years later. By then he was a goalie for the Los Angeles Kings. Mattson was in the nets for the game on January 28, 1984. That was the night that Gretzky's incredible record 51 point scoring streak came to an end.

Other than those two moments involving The Great One, Mattsson is all but forgotten about other than being the answer to a couple of good trivia questions.

Mattsson got an assist from teammate Dave Taylor in ending Gretzky's famous streak. About a week earlier, Taylor slammed Gretzky with a devastating but clean hit. Gretzky suffered a severe shoulder bruise.

Had his record breaking streak not been on the line, Gretzky almost certainly would have stopped playing. But he soldiered on, extending the streak by three games (including a 2 goal, 4 point, 1 armed performance against Vancouver in game 50). After getting shutout in game 52, Gretzky did sit out the next six games to recover from the injury. But, as the league's biggest draw, Gretzky still participated in the annual All Star Game first! Every NHLer who sits outs the All Star game nowadays should be told this. Although he may not have gone had he not already planned a quick vacation in nearby Atlantic City.

Gretzky returned from the injury and scored points in 20 out of the 22 remaining games. He finished that season with an unthinkable 87 goals, 118 assists and 205 points in 74 games. In the amazing 51 game scoring streak he registered 61 goals and 92 assists for 153 points!

By the way, the record of 51 consecutive games with a point could be considered to be even higher. Gretzky's 51 straight games was from the start of the 1983-84 season. But he ended the previous season with a 10 game point scoring streak. Shouldn't the record be considered 61 games?

Here is a few more interesting numbers from Gretzky's amazing streak and season:
at January 09, 2021