Who Was Better? Guy Lafleur vs Mike Bossy 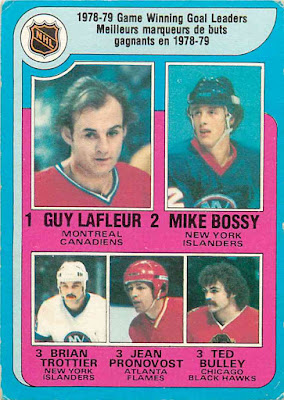 Guy Lafleur and Mike Bossy are two of the greatest goal scorers to have ever played the game of hockey. But who was better?

These two gunners had a lot in common. They were the two best goal scorers of their eras, succeeding each other as the game's dominant sniper. In doing so each served on successive dynasties, each arguably the greatest of all time. And the two Quebecois right wingers were superstars despite regularly smoking.

Their hockey Hall of Fame resumes are among the best in history. Bossy with his 573 goals, 1126 points in just 752 games. Four Stanley Cups. One Conn Smythe trophy. Eight All Star recognitions in just ten seasons. Then there is Lafleur with 560 goals and 1353 points in 1126 games. Five Stanley Cups. Two Hart trophies. Three Art Ross trophies and three Pearson trophies.

The numbers are bit hard to compare. Bossy went out in the prime of his career, forced out early due to a debilitating back injury. Therefore, he was never able to achieve the longevity of Lafleur. Though that prevented him from padding career numbers, his numbers never fell off like Lafleur's and pretty much every other player in history did.

In spite of the short career, Bossy had better offensive numbers almost everywhere except career assists and career points. His best years came in the 1980s, which which was a slightly higher scoring era than Lafleur's 1970s. Had he been able to play longer, even presuming an offensive slowing down from his prime, he likely would have dwarfed Lafleur's career numbers.

Yet when it comes to ranking hockey's greatest players, history has almost unfailingly given Lafleur the distinct advantage. There are several reasons for this.

Lafleur succeeded Bobby Orr as the greatest player in the game. Lafleur captivated audiences all by himself. He had a little bit of Rocket Richard's flare in him and a little bit of Jean Beliveau's grace in him. People in every NHL city came to see The Flower, hockey's main event.

Bossy in turn succeeded Lafleur as hockey's top sniper. Unfortunately for "The Boss," he was never the best player in the game. That torch undeniably was held by Wayne Gretzky. Bossy was the great goal scorer, but The Great One was even better.

It's too bad that Bossy was in many ways overshadowed by Lafleur and Gretzky, because he may have been the best shooter of all time. Bossy was the better goal scorer than Lafleur, as suggested by his better career totals in significantly fewer games. History tends to view Bossy as a one dimensional scorer, in that he relied time and time again on quick releases, one timers and overpowering shots. He was deadly accurate.

Lafleur, on the other hand, was a stylish scorer, scoring dramatic goals with highlight reel dekes and rushes. To watch the incredible Guy Lafleur was truly an event in the late 1970s.

Lafleur was regarded as more than just a goal scorer. He was the key offensive generator of the great Montreal dynasty of the 1970s. Bossy was part of a New York Islanders machine that was perceived to rely equally as heavily on Trottier and Denis Potvin.

And make no mistake, history also looks more favorably upon Lafleur because he played in Canada and was better exposed on television regularly back in those days.

Everyone adored Lafleur, for his artistry on the ice and for his swagger off of it. People did not warm to the confident, some say cocky, Bossy. This was partly because of his lack of comparable exposure and partly because his controversial and outspoken stands, such as on violence in hockey.

Who was the better goal scorer? Bossy. He may very well have been the best pure goal scorer ever. Certainly in the top five.

Who was the more dynamic offensive force? Lafleur, in his prime. He was the main event.

Had Bossy been able to stay healthy and play longer, he could have achieved career numbers that could have dwarfed Lafleur's, and maybe even challenged Gordie Howe's goal crown.

But based on their actual careers, I have to agree with history's reflection: Lafleur was the better player.
at January 10, 2021

Guy LaFleur had the courage to play without a helmet, while Bossy did not. I think that says it all.

Gretzgy might have got killed on the ice i. The 70s and worse wished for death if he played in the 70s.