Refereeing Controversies As Old As The Game Itself 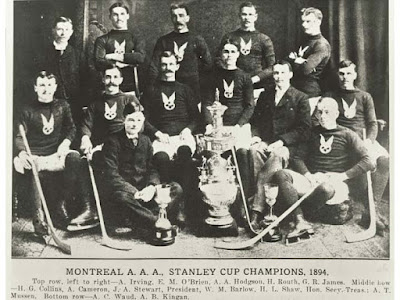 This is an actual - and amusing - newspaper clip from 1894. More specifically, it is a newspaper clip covering the very first Stanley Cup challenge match between the Montreal AAA and the Ottawa Hockey Club, also known as the Ottawa Capitals or Generals. Both were members of the Amateur Hockey Association of Canada.

March 22, 1894 - The hockey championship was decided here tonight, and never before in the history of the game was there such a crowd present at a match or such enthusiasm  evinced. There were fully 5,000 persons at the match, and tin horns, strong lungs and a general rabble predominated. The ice was fairly good. The referee forgot to see many things. The match resulted in favor of Montreal by 3 goals to 1.

The referee forgot to see many things! Oh my, that is worth a good laugh, although apparently the paper lacked the editorial space to expand upon this thought.

On March 23, 1894 the Montreal Gazette published a much more thorough review of the Stanley Cup final. It mentions that "the referee was not nearly strict enough."

Oh how some things never change. The very first Stanley Cup playoff featured an officiating controversy.  I'm pretty certain there has been moments in every Stanley Cup playoff ever since when someone was unhappy with the referee at some point. Keep that in mind as the new season is upon us.

The referee that night was Herbert Scott, of Quebec. He was assisted that night by "umpires" Anderson and Irwin. At this time little else is known about Scott, but I will continue to dig