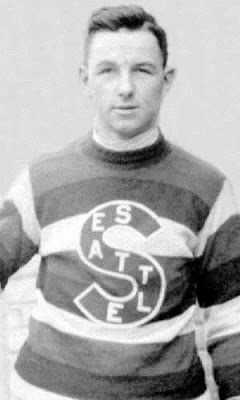 Roy Rickey was the only member of the 1917 Stanley Cup champion Seattle Metropolitans who never did get to play in the National Hockey League.

Now of course most of those Mets players were already established players for a number of seasons. And the NHL was just starting up in 1917. Most of the Mets players had brief appearances in the NHL late in their careers, but not Rickey.

Rickey, a defenseman from Ottawa, joined the Mets in 1915 and played eight seasons in Seattle. He was not exactly the most prolific scorer, but a solid contributor to the considerable team success.

That success included the 1917 Stanley Cup championship - the first by an American based team - along with return trips to the Stanley Cup final in 1919 and 1920.

Seattle was on their way to defeating the Montreal Canadiens in the 1919 Stanley Cup before the whole series was cancelled due to the Spanish Flu pandemic that killed Montreal star Bad Joe Hall. That terrible virus affected other players, too, including Rickey who was hospitalized and unavailable to play had they continued on.

In 1920 the Seattle Metropolitans lost the Stanley Cup showdown with the Ottawa Senators. The Senators would go on to form a hockey dynasty while the Mets began to decline thereafter.

By 1924 the Mets were done and Rickey's contract was sold to the WCHL's Edmonton Eskimos. Major pro hockey in the west would only last another season, as the NHL won the bidding war for players and forced the PCHA/WCHL into financial submission. Rickey's rights - along with that of Bullet Joe Simpson and Crutchy Morrison (nicknames were fantastic back in the olden days!) were sold to the New York Americans of the NHL for $10,000.

But Rickey never went to the Big Apple. Instead he went back to Ontario where he played and coached in minor pro leagues in Niagara Falls and Hamilton. He also played one final season, 1928-29, in Los Angeles.