Hockey Hall of Famer Harry "Hap" Holmes played only 103 NHL games, but enjoyed a 15 year career with 5 different leagues. He was one of hockey's early star puck stoppers, and had he not spent his best years out west, Hap Holmes almost certainly would be bigger legend in hockey circles today.

Holmes strapped on the pads for Toronto of the NHA, Seattle of the PCHA, Victoria of the WCHL which would later become the WHL, and Toronto and Detroit of the NHL. 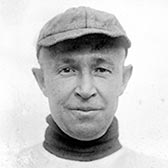 The cap-wearing Holmes backstopped four Stanley Cup winners, including two in Toronto, one in the NHA days and another in the NHL's very first season. He also backstopped Seattle and Victoria.However his most famous feat came in one of hockey's most infamous moments.That moment was the 1919 influenza cancelled Stanley Cup finals. The series featured the two best goalies of early hockey history, as Holmes went head to head with his nemesis, Georges Vezina. The final game was a 0-0 draw. Due to the flu, the referee called the game off to rest the weary players. That set up a 7th game showdown. Unfortunately that 7th game was never played, as the flu claimed the life of Joe Hall.Though much of his career pre-dated the NHL or was spent out west in the PCHA/WHL, the legendary Holmes finally became a NHL star at the end of his career. He, like most surviving members of the Victoria Cougars, relocated to Detroit. He played the final two seasons of his career in the Motor City, earning an impressive 17 shutouts in 85 games.Described as both fearless and non-chalent almost to a fault. Some mistook his "nerveless" approach to the net as lazy, just like some mistook his efficient play as unspectacular.Following his retirement from the crease, Holmes became instrumental in bringing AHL hockey to Cleveland. To honour his contributions, "Hap" Holmes is now forever immortalized in the American Hockey League. The top goalie in that league is awarded the Hap Holmes Memorial Trophy.Illness forced Holmes to seek warmer climates later in life. He relocated to Florida and operated a fruit farm until his death in 1941. He was just 53.The NHL honoured Hap Holmes with his posthumous induction into the Hockey Hall of Fame in 1972.Make no mistake, Hap Holmes truly was one of the best goaltenders in the world in his long, 15 year career. He was arguably the best goalie in the PCHA for six straight years. He saved his best play for the playoffs. His four Stanley Cup championships with four different teams should be stuff of legend. He even outduelled the likes of Georges Vezina and Clint Benedict.
at August 08, 2020