Long before there was Bob Probert or Todd Bertuzzi or John Ferguson or the Broad Street Bullies, hockey's bad boy was a man named Carol. Hey, he was actually born as Karl Wilhons Erlendson but the family changed their names. Regardless, Carol mostly went by his nickname - "Cully." 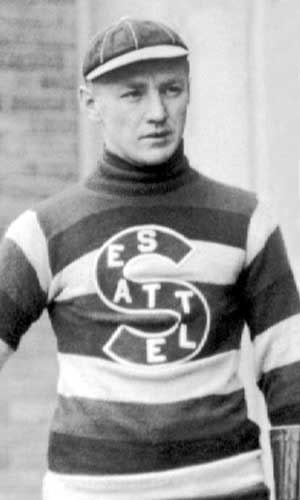 And make no mistake, Cully Wilson would make a name for himself as one of hockey's all time baddest boys.

"Cully" Wilson broke into the NHA in the 1912-13 season with the Toronto Blueshirts. He played on the 1914 Stanley Cup winner, then he really established his reputation as a thug. In 1914-15 Wilson had a whopping 138 penalty minutes in only 20 games.

The PCHA raided NHA clubs after the NHA teams attempted to sign the great Cyclone Taylor. Wilson signed with Seattle, where he would play the next four years. In the 1918-19 season, in a celebrated fight, Wilson viciously cross-checked Mickey MacKay of the Vancouver Millionaires, breaking MacKay's jaw and giving him a concussion.

The Stanley Cup finals that year pitted Cully Wilson against "Bad Joe" Hall of the Montreal Canadiens, the two baddest men in hockey. Reports at the time suggested "Joe Hall and Cully Wilson kept the game nicely spiced with their rough play. Hall was picking on (Jack) Walker while Wilson, as usual, took on everybody." Unfortunately the Stanley Cup was never completed that season due to a terrible influenza outbreak that claimed Joe Hall's life.

The following year he was loaned to the Montreal Canadiens after 8 games with the St. Pats. He loved playing for the Habs and refused to go back to Toronto the following season. He was initially suspended for the season, but the suspension was lifted when Wilson was traded to Hamilton. Hamilton was having financial problems and seized upon an opportunity to sell Wilson to the Calgary Tigers of the new WCHL.

Yet another vicious incident occurred in the 1924 playoffs involving Wilson. Howie Morenz had the hat trick in game one for the Montreal Canadiens as the Habs won 6-1. In the second game the Canadiens won the Stanley Cup by the score of 3-0, Morenz scoring again. But Wilson levelled Morenz with a vicious cross-check that tore ligaments in Morenz's shoulder and chipped his collarbone. No penalty was assessed on the play.

Wilson continued to play effectively for the next two seasons, and when the WHL folded, the Chicago Blackhawks picked him up. But by this time, Cully was over the hill and after the 1926-27 season, he was sent to the minors where he finished his career.

Wilson returned to Seattle after his playing days and worked for more than three decades for North West Steamship Lines. He passed away in 1962 at the age of 70.
at August 07, 2020

Hi! What is your source for his first names originally being Karl Wilhons? Only curious. If it's right I need it on my wiki page!

Hey Cully is an ancestor of mine, can confirm he was originally an erlandson