His name was Ed Carpenter, also known mistakenly as Carpentier. His given name was Everard. Most people called him Eddie. 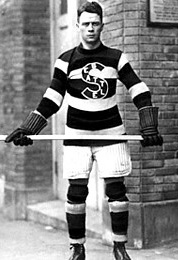 Eddie Carpenter was one of the first American born players in National Hockey League. He was born in Hartford, Michigan (no, not Connecticut) way back on June 15th, 1887, though he moved to Canada as a youngster. He grew up in Lachute, Quebec and as a young man moved to Port Arthur, Ontario, which is now known as Thunder Bay, and began working with the Canadian National Railway.

Carpenter returned to Port Arthur in 1917, serving with Canada's military at a base there. He would spend two years contributing to Canada's efforts in World War I.

The defenseman returned to the ice in 1919 and found employment with Quebec of the National Hockey League. He scored eight goals and twelve points.

The following season Carpenter moved to Hamilton to play with the Tigers for a season, adding two more goals and an assist to his NHL resume.

NHL salaries back then were not quite as lucrative as they are nowadays. Carpenter decided to retire and head back home to Port Arthur. He coached the local senior Bearcats team to back-to-back Allan Cup championships in 1925 and 1926 as Canada's amateur champions. He also sat on city council for a period of time.

Around 1945 Carpenter moved to Winnipeg to work as a locomotive engineer until his retirement in 1954.