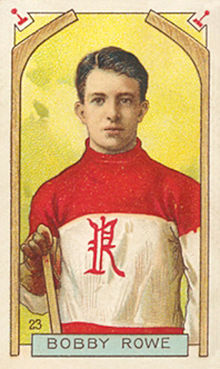 At a reported 5'6" and 160lbs you wouldn't think Bobby Rowe was big enough to be one of the most intimidating physical players of his time. But this hard hitting forward-turned-defenseman definitely earned the respect of the opposition.

Rowe had one of the longest careers in the early days of professional hockey. He started in 1909 in the National Hockey Association (forerunner to the NHL) and retired in 1926, at the age of 40.

But chances are you have never heard of Bobby Rowe. "Stubby" only played in 4 NHL games, all with Boston in 1924-25. He scored one goal.

His NHL stint was but a tiny footnote of an otherwise impressive career. After two years with Renfrew of the NHA (he played as a forward, scoring 24 goals in 26 games) he moved out west in 1911. He became a notable player in Frank and Lester Patrick's Pacific Coast Hockey Association, first with Victoria and then in Seattle. The PCHA quickly grew into the western equivalent of the eastern-based NHL. And Rowe was a mainstay in that league for 13 seasons.

When the PCHA eventually folded Rowe made his brief appearance in Boston but it was short-lived. He soon returned to the west coast, settling in Portland, Oregon where he became a long time coach.
at August 07, 2020