Jack Walker, veteran center-ice player with Detroit Cougars during the past season, has been judged the most popular player on the Detroit team, which is not surprising.

Walker, like Frank Nighbor of the champion Senators, is a type of player that plays the puck and not the man. Like Nighbor, he is poke-check expert, and also like the famous Senator star, he is a clean-living athlete and a credit to the game in which he has been a prominent figure for fifteen years. 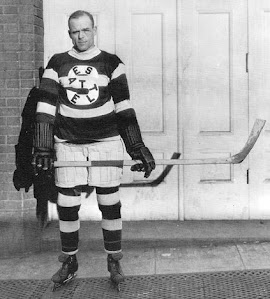 Those wonderful words were written about Jack Walker by the Ottawa Citizen back in 1927. By then Walker was in the twilight of his career. He was in just his second NHL season, but long before that he established himself as one the best hockey players in the world.

Walker's calling card was his defensive game. He was a great skater and the brainiest player of his day. In the days when forward passing was greatly restricted, Walker liked to prey on attackers in the neutral zone. He is often cited as the creator of the poke-check, though in reality it was more of a sweeping hook. He essentially created a one man neutral zone trap. And it worked to near perfection.

There was no Frank Selke trophy for top defensive forward in hockey back then. But they should have created one in honour of "the Old Fox," Jack Walker. Walker, who often played on the same line with scoring star Frank Foyston, sacrificed his own offensive totals to excel at the team game. He was rewarded with seven championships, including three Stanley Cups.

Frank Nighbor perfected Walker's defensive strategies, and perhaps got more credit but only because he plied his trade in the National Hockey League. Walker only played in 80 NHL games over 2 seasons, scoring just 5 goals. But he was one of hockey's most valuable players and all stars in the NHA (Toronto Blue Shirts) and PCHA/WCHL (Seattle Metropolitans and Victoria Cougars) before that. Three times (with three different teams and in three different leagues) he was instrumental in winning the Stanley Cup.

In 1960 Jack Walker was rightfully included in the Hockey Hall of Fame.