As I sit in Edmonton on the eve of the 2020 Stanley Cup playoffs, I can't help but think back to the great days of the Oilers dynasty.
Though I grew up a Canucks fan, it was pretty hard not to be an Oilers fan in the 1980s. The Canucks were brutally bad most of the decade, and were almost always feasted upon by Wayne Gretzky and the Oilers. 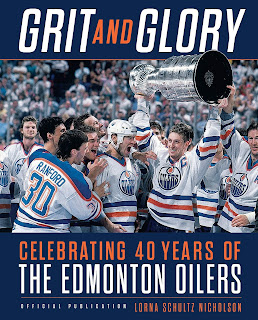 The Oilers were nearly unstoppable. They were cocky and tough, high flying and electrifying. They were the most entertaining team I have ever watched.
More over, they were winners. Five Stanley Cup championships in seven years, with Stanley Cup final appearance directly preceding that. Modern teams try to spin their successes as such, but the Edmonton Oilers truly were the last hockey dynasty.
Of course the Oilers were led by #99, Wayne Gretzky. There is no doubt in my mind he was the greatest player whoever played the game. Others will say Bobby Orr, or Gordie Howe or Mario Lemieux. And I will not argue that they were better players necessarily. But the best player is a different argument than the greatest player. The greatest player had the greatest career. And no one comes particularly close to The Great One.
Mark Messier deserves his due in Edmonton. I am a harsh critic of his for his time in New York and especially Vancouver, but in Edmonton he was truly a force. Gretzky's presence kept his ego in check, and coach Glen Sather knew how to unleash Messier at the right time. When the Oilers needed something to change the pace of the game, the Messier line (always with Glenn Anderson at his side) would lead the way with physical play or incredible speed or a big goal.
I could never quite figure out Glenn Anderson. Clutch goal scorer who seemed to always come through the bigger the game was, Anderson could go all night without being remarkable, too. A wonderful skater, his interest in the international game always intrigued me. Early in his career he said he would like to play for the Soviets back before the Iron Curtain came down. As a kid I wondered if it was possible for the Oilers to trade him to the Soviets and who would the Oilers receive in return. 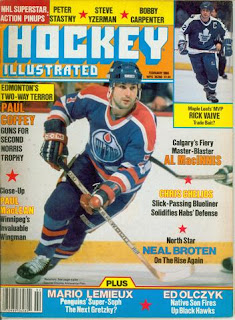 Everyone thinks of Paul Coffey's skating ability when they think of the Oilers star defenseman. That and his reputation for being basically a "offenseman" and not playing defensively particularly well. Scott Niedermayer may be the only player in my lifetime to rival Coffey's skating ability, but when I think back to Coffey's heyday I always think of his first pass brilliance out of his own zone. I think Coffey may be the most underrated player in the Hockey Hall of Fame. Aside from Gretzky, he was so integral to the Oilers emergence.
Jari Kurri was always Gretzky's wing man, quite literally. His goal scoring totals were amazing, but it took a while for the hockey world to give Kurri recognition as one of the best two way players in the history of the game.
Grant Fuhr and Andy Moog were a fantastic tandem, with Bill Ranford arriving later on. Only Fuhr ended up in the Hockey Hall of Fame, but as a BC kid I was always a little more partial to Moog and Ranford. Fuhr played the game purely by instinct. I think he worked harder at his scratch golf game than his hockey sometimes, which is an unfair knock on my behalf. If he could play games and never practice I think he would have been thrilled. 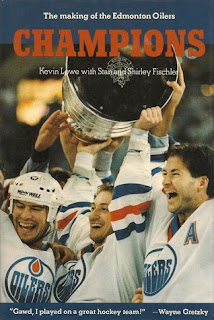 Kevin Lowe was a key guy in the dressing room and one of the best defensive defensemen of his time. Is that enough to get him in the Hockey Hall of Fame? Well, apparently as the HHOF enshrined him in 2020. But I have to disagree. He was good, but was he better than other defensive stalwarts of the era like Brad McCrimmon or Mike Ramsay or Jamie Macoun? None of those guys were close to the era's gold standard of Rod Langway. Lowe was good but his one ice contributions were not as integral to the Oilers' success as the other enshrined Oilers. There's a bit of an "old boys network" smell to this enshrinement.
Some of my favorite Oilers were the grinders, the role players, the supporting cast.
Esa Tikkanen was a favorite of mine until the day the Oilers traded Gretzky to the Kings. The Oilers then used Tikkanen to shadow and annoy Gretzky and he was perhaps the most successful player in that impossible shut down role. As a Gretzky fan, I just wanted Tik to go away.
Guys like Marty McSorley, Kevin McLelland, Craig MacTavish, Craig Muni, Charlie Huddy, Steve Smith, Lee Fogolin and Randy Gregg were big and mean, and provided more defensive play than the Oilers were ever given recognition for. Yes, the Oilers were all about offense in the 1980s, but for that ten year period they were ranked 10th (out of 21 teams) defensively.  Average defensively is okay when you had the offense the Oilers had. Their goal differential for the decade was +797 in 800 regular season games after all.
(I believe it was the old coach Tom Watt who said something to the effect that the Oilers always started the game with a one goal lead because of Wayne Gretzky's presence. How right he was!)
Will there ever be a true hockey dynasty again? The salary cap structure suggests no. That is both good and bad. Good as in parity is needed so that fans of every hockey team have to believe their team has a chance to win the Stanley Cup, if not now then in the near future. But it is bad, too, in the sense that we may never see truly great teams ever again.
at July 30, 2020