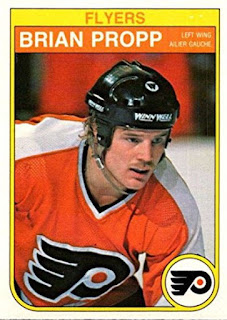 When Brian Propp was selected in the 1st round, 14th overall by Philadelphia in 1979, the Flyers knew they had drafted a player with one of the most marvelous junior careers in hockey history.

During his last junior season he shattered all kinds of scoring records together with his line mates Ray Allison and Laurie Boschman. The trio combined to score an amazing 496 points (220 goals and 276 assists) during the regular season. Propp's own statistical line consists of a ridiculous 94 goals and 194 points in 71 games. The trio continued their rampage in the playoffs, scoring 109 pts (44 goals and 65 assists) in 22 games. Propp led the way with 38 points, and then another 11 in 5 Memorial Cup games.

By the time he turned professional Brian held the Canadian junior career scoring record with his 511 points including 219 goals and 292 assists in just 213 games. While the record has since been bettered, there is no doubt that Brian Propp is a legend in Canadian junior hockey history.

Looking at those lofty scoring statistics in comparison to his NHL stats might suggest he was a bit of a let down in the 1980s. It was not uncommon for the elite offensive players to be scoring in excess of over 120 points during that decade. Anyone who watched Propp dominate the WHL would have expected Propp to be topping out at the offensive levels of Dale Hawerchuk, Denis Savard, Bernie Nicholls, Kent Nilsson, Denis Maruk or Peter Stastny. He was every bit as talented as the members of that group.

While he never had a single enormous offensive season, Propp's strength was his consistency, as his point total with the Flyers suggest. During the 1980s he scored 75, 66, 91, 82, 92, 97, 97, 67, 76, and 78 points in successive seasons. He was one of the league's best left wingers during the 1980's but his work often went unnoticed by the media and the fans outside of Philadelphia.

But scoring stats never properly told the story of Brian Propp. He was quiet and shunning of any spotlight. He always placed the team's goals ahead of his own, and he worked hard to become a complete player. He became a tremendous defensive player while averaging over a point per game. Blessed with speed and strong anticipation skills, he and Dave Poulin formed a tremendous penalty killing tandem, perhaps the best of the 1980s. And though he was small at 5'10" and 195lbs, he was very willing to initiate physical play, although he understandably didn't like being the recipient of such contact. He also had a reputation as one of the top divers in the league.

"He was always near the top when it came to aerobic stress tests as well as condition tests. It had to have been genetic because he was always way ahead of everyone else without even having to train nearly as hard. His longtime Flyers teammate Dave Poulin nearly had to kill himself to reach Brian's aerobic capacity, while Brian could almost coast to reach an even higher level."

Though he was a fine playmaker always had more assists than goals, Houda also remembers Propp as a goal scorer.

"He had probably the best eye-hand coordination in the league during the 1980's. Many of his goals were scored on deflections and tip-ins."

Propp definitely had a goal scorer's mentality, with a real nose for the net. He was always amongst the league leaders in shots on goal. He had a big slap shot from the top of the face off circle, but also possessed a lethal wrist shot. He was also very opportunistic, and knew how to exploit openings and dart in and out of traffic looking for garbage goals.

Propp also had a very good first-step quickness. He was an outstanding skater but it was his explosive out-of-the-blocks quickness that made him a dangerous scorer.

The Flyers, not coincidentally, were extremely strong during Propp's tenure. Three times they made the Stanley Cup finals, twice falling short against the incredible Edmonton Oilers both times. Both series, especially 1987, were classic battles. The Flyers also lost in 1980 to the New York Islanders.

Brian scored a total of 876 points in 790 games with the Philadelphia Flyers before he was traded to Boston for a 2nd round draft pick in the 1990 entry draft. His stint in Boston was short (14 regular season games and 20 playoff games), but pretty successful as he got to the Stanley Cup finals with them in 1990.

That same summer he signed as a free agent with the Minnesota North Stars. He proved to be a great acquisition and scored 73 points during the regular season. He then helped Minnesota reach the Stanley Cup finals later that year (1991),scoring 23 points in 23 playoff games, but once again he lost in the finals. It was his fourth Stanley Cup final defeat in four consecutive years, and fifth defeat of his career. The  disappointment never got easier.

Propp played another two seasons with the North Stars before playing one season in Switzerland with Lugano (1992-93). He finished his career with the Hartford Whalers in 1993-94 after having signed as a free agent on October 4,1993. That last season Brian eclipsed two magic milestones: 1000 games and 1000 points. Fittingly enough Brian scored his 1000th point (a goal) against his former club, Philadelphia. Brian not only scored 1004 points in 1016 regular season games but also had a very fine 148 points in 160 playoff games.

Brian played in five All-Star games but would have traded them in a heartbeat for a sip from the Cup. He will go down in history as one of the most underrated left wings in NHL history. When he retired he was the 7th highest scoring left winger of all time.
at January 02, 2019