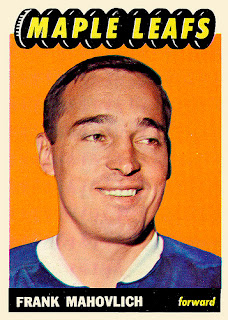 Frank Mahovlich is one of a very select few who would star with Canada's two most cherished sports franchises, the Toronto Maple Leafs and Montreal Canadiens. He also starred with the Detroit Red Wings.

Starting his career in Toronto, The Big M is arguably Toronto's most cherished hockey hero, yet also one of its most criticized.

The Leafs enjoyed their greatest success with Mahovlich leading the way. He helped them to 4 Stanley Cup championships in the 1960s. Mahovlich was a big man with a long powerful stride that powered himself through the opposing team's defense. Add to that his uncanny stickhandling and an overpowering shot, and Mahovlich was pretty much a perfect hockey player.

"Mahovlich moved like a thoroughbred, with a strong, fluid style that made it look as if he was galloping through the opposition. In full flight, he was an imposing figure. An explosive skater, Mahovlich could spot the right moment to turn it on and burst in on goal. He had a great move where he would take the puck off the wing, cut into the middle of the ice and try to bust through two defencemen for a chance on goal. He didn't always get through but when he did he scored some memorable goals. His style of offence caused teammate Dave Keon to remark: Nobody scores goals better than Frank."

Despite the team's great success and Mahovlich's status as one of the greatest of his day, many believed we never got to see the best of The Big M. Most of his best years were spent in Toronto under boss Punch Imlach. Imlach, who could never pronounce Frank's last name, tried to reign in Mahovlich. He and Mahovlich never got along. Imlach was an old stubborn hockey man who was determined to break Mahovlich, who just shrugged off Imlach's antics, although he secretly hurt for years. Therefore, many believed as good as Mahovlich was, he could have been better under a different coach.

Mahovlich tried to become the player his coach wanted him to become as well, focusing on defense more and more instead of going on the attack at all times. This lead to many fans turning against their hero. They had seen how good he could be, why was he holding back so much?

A talented and diverse athlete (he turned down an offer from the Boston Red Sox organization to play pro baseball), Mahovlich entered the league in 1958. That year he won the Calder Trophy as the league's top rookie, beating out another hotshot left winger named Bobby Hull.

Frank played parts of 12 seasons in Toronto. He was a constant 30 goal threat, topping out at 48 in 1960-61 when he played on a line with Red Kelly and Bob Nevin. In that year he actually reached 48 goals with 14 games remaining. Poised to break Rocket Richard's record of 50 goals, Mahovlich inexplicably went into a scoring slump. When talk around the league should have been about the 23 year old's magnificent season, it was all about his year end slump.

Mahovlich and the Leafs would win the Stanley Cup for three consecutive seasons starting in 1962, and capture a 4th title in the much ballyhooed 1967 season. During this time Mahovlich averaged over 30 goals a year, but there was much criticism of him from coach Imlach and a loud number of the fans who bought into Imlach's campaign. It seemed nothing Mahovlich could do was good enough. Things got so bad that the Big M was actually hospitalized with acute tension and depression, and later would leave the game after suffering a nervous breakdown. Described as a shy and sensitive person, the hockey prodigy paid a high price for hockey stardom.

Mahovlich was dealt to Detroit in 1968 in one of hockey's biggest blockbuster deals. Garry Unger and Pete Stemkowski went with The Big M to Detroit in exchange for Paul Henderson, Norm Ullman and Floyd Smith. In Detroit he was teamed with Gordie Howe and Alex Delvecchio on a line that would leave goalies sleepless the night before facing the Wings. Relieved from the pressures of Toronto, Frank enjoyed his best season as a Wing. In 1968-69 he scored 49 goals!

Frank's tenure in Detroit was fairly short-lived as in 1971 he was moved to the Montreal Canadiens and helped them to two Stanley Cup Championships thus giving him 6 rings of his own. He also cherished the opportunity to play with his little brother, Peter. Frank averaged 37 goals a season in 3 full seasons in Montreal. Mahovlich was absolutely dominant in the two Stanley Cup seasons he spent in Montreal, leading the team in scoring in the 1971 playoffs and finishing 2nd in the 1973 campaign.

After 3 years with Montreal he jumped to the World Hockey Association with, somewhat surprisingly, the Toronto Toros and later the Birmingham Bulls. In all he spent 4 seasons in the WHA before retiring in 1978.

His effortless style made some fans wonder if he could have been better. 533 goals and 1103 points, 9 NHL All Star teams and 6 Stanley Cup rings tells you just how good he was.

One of the classiest people you'll ever meet, nowadays "The Big M" is known as Senator Frank Mahovlich. In 1998 he was appointed to the Canadian senate by Prime Minister Jean Chretien.