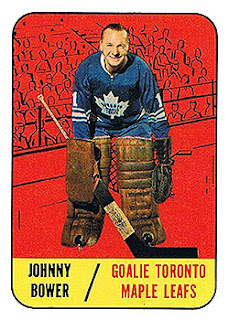 Johnny Bower, born as John Kishkan, in essence had two outstanding hockey careers: One "riding the bus" in the minor pro leagues for 13 years, and a second enjoying 11 full NHL seasons with the Toronto Maple Leafs.

But before his hockey career had begun, Johnny almost lost his life and/or freedom in Europe due to World War II.

At 15 he lied about his age in order to fight for his country. Johnny was supposed to be a part of the 1942 invasion of Normandy at the port of Dieppe. The 6000 man mission was simply disastrous as about 3400 men lost their lives or were seriously wounded and most of the rest were taken prisoner.

"I'd been all set to go but a day or two before the raid, nine fellas in my company, including myself, got so sick with a respiratory infection, they had to take use of the boat and put us in hospital - we could hardly breathe, " remembered Bower, an 18 year old infantryman at the time. "I guess if I'd gone, I probably would have lost my life. Most of my friends did."

After dodging bullets on the battlefields of Europe, dodging frozen hockey pucks as a long time goaltender must have been a piece of cake for Johnny. That being said it was amazing he was ever able to pursue hockey even at a recreational level. Johnny developed an acute form of arthritis in his hands, a condition which led to his discharge from the army.

"I used to think I'd never be able to hold a goal stick again."

Later on he said "When I was with the Leafs, I'd finish a game, and my stick hand would be locked right up like a claw. Some nights, it was so stiff and sore, it'd take me an hour just to get it open and working."

Despite the battles with arthritis, Johnny became one of the swiftest and most graceful goaltenders ever to play the game, although it took him a long time to crack an NHL lineup.

Johnny bounced around the minors for a long 13 years. He was named the American Hockey League's best goaltender and the league's most valuable player on three occasions. He also played one season with Vancouver in the Western League, and was named top goalie.

Bower had a stint with the New York Rangers, but did not stick in the National Hockey League until 1959 when he became a 35 year old "rookie" with the Toronto Maple Leafs.

It's truly amazing that one of the greatest goalies the game has ever seen took so long to get established, but he was worth the wait for Maple Leaf fans. Of course, back in these "Original Six" days there were no backup goalies and therefore only 6 jobs in the NHL for a prospective net keeper. It wasn't a matter of Johnny not being good enough more than just a lack of an opportunity.

The opportunity to join the Leafs presented itself when Punch Imlach gained power in Toronto. Under Imlach's vision and Bower's goaltending, the Maple Leafs would capture four Stanley Cup championships. He shared the Vezina trophy in 1965 and played in five all star games. He had an amazing 2.52 goals-against average in 552 games, 251 of which were victories.

The Leafs had struggled through much of the 1950s, but upon Bower's arrival the team's outlook improved dramatically. In his first season he guided the Leafs to the Stanley Cup finals, but were ousted by an incredible and seemingly unbeatable Montreal team.

In 1961 he turned his most sensational regular season - posting a league leading 33 wins and 2.50 goals against average. But the Leafs suffered a major setback and made a quick exit from the playoffs.

Bower wouldn't let the setback ruin this team's destiny, and backstopped the Leafs to three successive Stanley Cup championships in 1962, 1963 and 1964. The mask-less wonder who was known for dangerously diving head first into the feet of a skater in order to perfect the poke-check had cemented himself as the toast of Toronto.

To aid in the making of the legend was the television program Hockey Night In Canada. After the first few years Hockey Night firmly established itself as on television and Bower's rise to greatness was literally witnessed by an admiring nation.

The "China Wall" played with the Leafs through 1969. In the years following the "three-peat," the aging Bower found himself splitting the goaltending duties with the great Terry Sawchuk, and then another minor league veteran in Bruce Gamble. Bower counts the opportunity to play with Sawchuk among his career highlights. Even though he was a 40 year old veteran of 20 professional seasons and one of the all time greats himself, Bower found he was learning so much about goaltending while playing and practicing with arguably the greatest goaltender of all time, even if Sawchuk himself was in his twilight also.

Bower and Sawchuk backstopped the Leafs to one last hurrah in the surprise 1967 Stanley Cup championship. That year the Leafs and Montreal Canadiens faced off as the Canada celebrated 100 years of nationhood. The Leafs weren't supposed to win - they were a team of old warriors but they were supposed to be too old to knock off this Canadiens team. Yet somehow, as if it was there destiny, this team of overachievers enjoyed one last championship. It proved to be the last championship, and probably because of that is held in such high regard by Leaf fans of the modern era.

"I never dreamed at my age that I'd even be playing for Toronto so winning the Stanley Cup was just unbelievable," says Bower.

"A lot of guys on that team were way over 30, and a lot of them had never had their name engraved on the Stanley Cup.

"They gave the best effort they possibly could. We played with a lot of injuries, too. Nobody said anything about it at the time. If we had to play one more game against Montreal, we would have lost because of all the injuries we had."

Bower finally retired in 1969 and was rightfully inducted into Hockey's Hall of Fame in 1976. One of the most visible figures from the Leafs much-loved 1967 Stanley Cup championship team, he remains one of the most popular Toronto Maple Leaf in history.

Not everyone knows it, but Johnny Bower fancied himself as quite the singer. In his most famous recording, Johnny teamed up with his own son John and some other children, known as the Rinky Dinks, to release Honky The Christmas Goose (click on link to listen to the entire song). They also sang "Banjo the mule," but to no great success. Honky actually made it to #29 on the Canadian music charts in 1965
at January 02, 2019