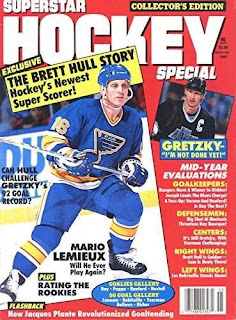 Brett Hull and Henri Richard share some things in common. They are both among the games greatest ever. And in terms of hockey's legendary status, they both had even greater relatives.

Henri had to live under the shadow of his brother "The Rocket," Maurice Richard. To make things even harder for him, he had to do in Montreal, where The Rocket is god.

Brett Hull had come from under the shadow of his dad, "The Golden Jet" Bobby Hull. Like Henri Richard, Hull's abilities lifted the shadow and he now ranks right up there with dear old dad, some say even ranks higher.

"The Golden Brett" was a happy-go-lucky kid who people said was too lazy to make the NHL. But Brett soon proved them wrong. He was a goal scorer. A pure sniper, perhaps the best sniper that ever lived. His all-round game really improved over his career as he learned to use his teammates more and no longer was a defensive liability.

But scoring goals was always what he loved to do.

Hull scored 105 goals in just 56 games in Penticton at the Junior B level as a teenager. He then moved on to the University of Minnesota-Duluth, a team and city he loved dearly, and recorded 84 goals and 144 points in a total of 90 games. There was no doubt this guy could score. Whether he could play at the NHL level was still a topic of debate by many scouts.

In the 1984 Entry Draft, the Calgary Flames took a chance on the chubby kid from Belleville Ontario. He was their 6th choice, 117th overall. He would be assigned to Moncton of the American League in his first season, where he scored 50 goals in 67 games as a rookie, but clashed with head coach Terry Crisp. It would not be the last time Hull would struggle to be understood by a head coach.

1987-88 marked Brett Hull's permanent arrival in the NHL. Also getting promoted to the NHL, much to Hull's dismay, was coach Crisp. He played 52 games with Calgary and recorded 26 goals and 52 points, impressive totals for a rookie on a talent rich team like the Flames of the late 1980s. Hull was buried behind fellow right wingers Lanny McDonald, Hakan Loob, Joey Mullen and Mark Hunter. As a result Hull struggled to find his confidence and ice time. Already established as Crisp's whipping boy, Hull was often a healthy scratch.

Despite the lack of ice time, the choppy skater was getting noticed around the league for his ability to score goals. So much so that rival GMs kept inquiring about Hull's availability on the trade market. At the trading deadline, the Flames moved the scoring sensation along with Steve Bozek to St. Louis for Rob Ramage and Rick Wamsley. Ramage and Wamsley played significant roles in Calgary's Cup win in 1989, but Hull went on to superstardom that he never even dreamed about.

After recording 41 goals in his first full year with the Blues, Hull exploded in 1989-90, tallying 72 goals to break Jari Kurri's record for goals by a right winger. He added 41 assists for 113 points and won the Lady Byng trophy and a First All Star Team placing. Hull, who would sign a whopping $7.1 million four year contract in the summer, was quick to credit center Peter Zezel for his success. Unfortunately for Hull Zezel was traded away about two weeks after Hull's contract signing.

The following year began with Hull very much feeling the pressure to at least come close to his success from the year before. Burdened with the massive contract and fear of playing without Zezel, Hull determinedly got off to a quick start. Soon he found a new center - Adam Oates, the best playmaking center of our era whose name was not Wayne Gretzky. With the help of Oates feathery passes, Hull blew away his own record and scored 86 goals in 78 games! Only Wayne Gretzky has scored more goals in a single season (87 and 92 goals). Hull finished with 131 points and won another First All Star Team berth, the Hart Trophy and the Lester B. Pearson Trophy.

In fact, it is scary to think that Oates missed 19 games that season due to injury. Had he stayed healthy, could Hull have toppled Gretzky's record of 92? Could Hull have approached the century mark?

During the 1990-91 season Hull became only the fifth player in NHL history to record 50 goals in 50 or fewer games. Hull did it in 49 games, tying Gretzky for the fourth-fastest 50 goals in history. Only Gretzky (39 games and 42 games) and Mario Lemieux (46 games) reached 50 faster than Hull. Other 50-goal scorers in 50 games were Maurice Richard and Mike Bossy, who both needed the full 50 games to hit 50 goals.

Just incase there was any doubt about his goal scoring dominance, Hull again tipped the 70 goal mark the following season. Again he scored 50 goals in exactly 50 games, joining Gretzky as the only players Gretzky to achieve the 50-50 mark twice in his career.

Unbelievably Hull had 228 goals in a span of 231 NHL games - absolutely mind boggling! There was no doubt about the sweet music of Hull and Oates in St. Louis.

Despite his success, his outspoken nature and his embracing of USA over Canada made if hard for Hull to get the same adoration as stars like Gretzky or Steve Yzerman. Hull was often criticized by Canadian fans for his betrayal of his birth country. Born in Ontario and raised in BC, Hull held dual citizenship as his mother was an American. When the time came for international tournaments, Hull opted to skate for Team USA instead of Team Canada.

Inexplicably, the Blues traded Oates after the 1991-92 season. Hull's goal totals declined to realistic yet still impressive numbers, but he openly admitted he was never quite the same player following Oates' departure.

Hull remained with the Blues until the end of the decade. Always known as a loose cannon with his comments, Hull carried on a well-reported and bitter feud with coach/GM Mike Keenan for several years and was one of the first players to criticize the defense-first style of hockey that rose in the mid-1990s. Hull was even once quoted suggesting golf was his true sporting passion and that he didn't even like hockey the way it had become in the late 1990s.

In 1998-99, Brett Hull's more than 10-year run as the face of the St. Louis Blues organization finally came to an end in a contract dispute. Although both sides were close on the salary issue, somewhere in the neighborhood of $5 million per season, the Blues refused to give Hull the no-trade clause he demanded and that they granted goaltender Grant Fuhr. When the team imposed contract deadline passed, Hull, a man of principle, left for Dallas.

Often considered to be the type of player who would put himself ahead of the team. He finally shook that label in 1999 after signing as a free agent with the Dallas Stars. Under coach Ken Hitchcock, Hull bought into the the coach's defensive game plan that saw Hull's offensive opportunities plummet, yet the team's success skyrocketed. Hull played great - hustling back to cover his man, digging hard for lose pucks, doing small intangibles that helps the team win.

And Hull was rewarded that spring as the Stars won the Stanley Cup. Finally Hull could be called a champion instead of chump. For good measure, it was Hull who scored the Cup winning goal, in dramatic fashion in overtime, nonetheless.

That goal of course was very controversial. In overtime of game 6 of the Finals against Buffalo, Hull lifted the puck over a sprawling Dominik Hasek. However the only problem was that Hull's skate was in the crease. At this point in history the NHL reviewed every goal on video to make sure crease violations were enforced. However this goal was allowed to stand, much to the dismay of Buffalo fans.

Three years later in Detroit, Hull recreated himself again, playing with youngsters Henrik Zetterberg and Pavel Datsyuk on a line Hull dubbed the "two kids and an old goat" line. The trio was instrumental in helping the Red Wings win the 2002 Cup.

Hull retired just 5 games into his 19th season, now with the Wayne Gretzky coached Phoenix Coyotes. After missing a full year due to the 2005 NHL lockout, Hull found he couldn't perform at the level he wanted.

He finished with 103 playoff goals, fourth all-time behind Gretzky, Mark Messier and Jari Kurri. His 24 game-winning goals in the playoffs tie with Gretzky for the most all-time and reinforce his reputation as one of the greatest clutch scorers of all time.

So what is the secret to Brett Hull's success? Even Hull admits he doesn't really know. One piece of advice Brett took from his famous father, was the idea that when a player is most out of the play is when he's actually most dangerous. Brett Hull has always played the game with that in mind — sometimes skating away from the play to lose a defender and then doubling back to come into a prime scoring area with no one defending against him.
at January 02, 2019

zetterberg wasn't on detroit in 2002. he arrived in 2003. the 2 kids and an old goat line was originally datsyuk hull and devereaux (believe it or not.)

How many teams has Keenan ruined?