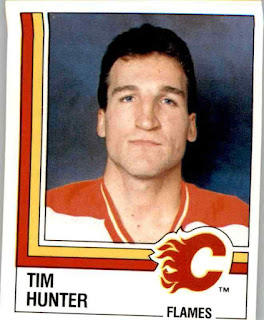 Tim Hunter only scored 138 points in over 800 NHL games, but was a player every team in the NHL would have loved to have on their bench.

"I was a player with not a lot of talent but came to play every night and played very hard, hated to lose and loved the game and loved to win."

Tim had no measurable finesse skill to speak of. He was at best an average skater. He had no speed or agility on skates but had excellent balance, which aided him in the physical game. He could do little with the puck in terms of shooting, passing or handling. Most of his goals came by crashing the crease or accidentally deflecting off his shin guard.

While Tim lacked the skills to do the finesse game, he excelled at the physical game. He was as big and strong as they come. He did some good work along the boards and in front of the net. And of course Tim was a willing and good fighter, and occasionally would use his lumber in a not so legal manner.

Tim had a small and well defined role on the ice, but it is impossible to over exaggerate the importance of his contributions off of it. He was a great team player - excellent in the dressing rooms. The Calgary Flames became a powerhouse in the 1980s, and Tim's fingerprints are all over that. His wit, humor, support and leadership helped to mold a group of individuals into a top flight team. It is Tim's off ice contributions that were the most important contribution he made to his hockey team.

Hunter finished his playing career with 62 goals, 76 assists and 138 points and 3,146 penalty minutes in 815 regular season games while collecting 13 points in 132 playoff contests.

Tim stepped behind the bench to become a long time assistant coach at the NHL level, usually aiding head coach Ron Wilson in several stops. Its a natural progression for Tim, who as a player practically did a similar job anyways. Only now he gets a little less ice time during games!

To pursue a head coaching job at the NHL level, Hunter opted to leave the league altogether. His journey took him to Moose Jaw, where he has been coaching junior kids for five years now. His success there has led him to Team Canada and the World Juniors in 2019.

It was a smart move by Hunter. The NHL has increasingly become a young man's game, as so many of the junior superstars are able to step right into the league immediately. But the old guard has trouble relating to the new generation at times. Hunter, who is about as old school as you can get, has ridden in the junior buses across the Canadian prairies and understands the generation better than many. A gold medal performance for Canada in 2019 might just get Hunter his own bench job back in the NHL

No biography of Tim would be complete without mentioning his nose. It s one of the most well recognized in the business. One would think by looking at it that this former NHL tough guy must have had his nose broken a dozen times, but Tim says he has never had a broken nose!
at December 30, 2018