Mario Lemieux: The Best Ever? 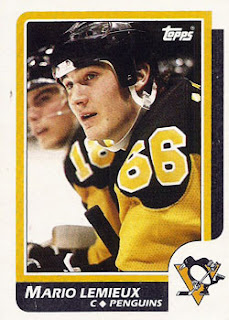 Many people celebrate Mario Lemieux as the greatest player ever to play the game of hockey. He is almost universally on everyone's "top five" list if not "top three." Based on pure talent, it is hard to argue that he is not number one.

Notwithstanding his many awards and championships, and his mindbogglingly impressive statistics, perhaps the most amazing thing about Mario is he did this while battling a chronic back and hip injuries and Hodgkin's Disease.

Mario was the complete package. He was a pure scorer and the ultimate playmaker fused into the body of giant. Often compared to Jean Beliveau,

Lemieux was big and strong but he rarely had to rely on brute strength to fend off defenders. Instead he left them baffled with an incredible series of fakes and dekes. With a few long strides he was seemingly untouchable in effortless end to end rushes. Rarely has a sport's dominant player made the game look so easy and natural.

Mario played in only 915 games as he missed many games due to his health problems. In fact, he retired three times due to injury. Despite this he has one of the most impressive resumes in history of sport:

Mario Lemieux was drafted in 1984 by the Pittsburgh Penguins, first overall. Mario had just come off of an amazing Junior year, scoring 133 goals and 149 assists, giving him the highest point total in Quebec Junior hockey ever, bettering his boyhood idol Guy Lafleur's legendary goal record.

The Pittsburgh Penguins were the worst team in the league. An awful product on the ice led to empty seats in the Igloo, and serious concerns if the franchise could survive much longer in the city of Pittsburgh. Mario was seen as their savior. Little did we know then that Mario would save the franchise not once but twice.

In his very first game, on his very first shift, Mario put the puck behind the goalie. He would go on to win the Calder trophy that season after becoming just the third rookie to post 100 points in a season.

The following two years Mario ranked among the NHL scoring leaders but it wasn't until the 1987 Canada Cup that Mario took his game to the superstar level. Playing with and learning from Wayne Gretzky, Mario had an incredible tournament, scoring a tournament record 11 goals in 9 games. His 18 points were only bettered by Gretzky's 21. Four of his goals were game winners, including the dramatic series clincher. In a scene that unthinkably rivaled the heroics of Paul Henderson in 1972, Mario took a drop pass from Gretzky and fired a shot past Soviet goalie Sergei Mylnikov at 18:34 of the third period in the final game of the tournament.

"Speaking specifically of the Canada Cup in 1987," Lemieux pondered with HHOF.com, "I learned so much about how the great players work and conduct themselves. Remember, I was only 21 years old at the time. To be around guys like Wayne and Mark Messier and Paul Coffey, guys who'd already had so much success and had won Stanley Cups, was a tremendous learning experience."

Mario never looked back after that tournament. Not only had he arrived in a hockey stratosphere occupied only by names like Gretzky, Bobby Orr, Gordie Howe and a very few others, but he made a serious challenge to push the stratosphere even higher.

"The Canada Cup was very intense, but it was a great springboard for the NHL season," he admitted. "I was fortunate enough to win my first scoring title that season [with 168 points]. The learning experience and the momentum of the Canada Cup were definitely factors in that," Lemieux said.

1988-89 was Lemieux's finest offensive season. He scored 85 goals and 114 assists for 199 points. He fell just one point shy of joining Gretzky as the only player to score 200 points in a single season. Perhaps his greatest individual performance was on New Year's Eve, 1988. In that game against the New Jersey Devils, Lemieux scored five goals five different ways. He scored an even-strength goal, a power play goal, a short-handed goal, a penalty shot goal, and an empty net goal. No one had ever done this before, and no one has done it since.

The first of several seasons shortened by his degenerative back problems was 1989-90. Despite this set back, he returned late in the 1990-91 season to lead the Penguins to its first Stanley Cup championship. You can bet Mario's back felt a whole lot better as he drank champagne from that Cup. In fact it helped so much the doctor's prescribed the same medicine the next year. So Mario made it two in a row in 1992.

1992-93 proved to be a damning year. He was the League's most dominant player, the crown jewel. But hockey took a back seat in Lemieux's life as Lemieux made it publicly known that he was diagnosed with Hodgkin's disease, a form of cancer. Lemieux had to take time off as he underwent radiation treatment from February through early March. Then, in one of the greatest feats in all of sports, Lemieux immediately returned to the NHL and went on late season scoring rampage to capture the Art Ross Trophy. He was also named as the MVP.

Due to the many injuries and the cancer, Mario took the 1994-95 lock-out shortened season off. He returned in 1995-96, winning yet again the Art Ross and Hart Trophies. He repeated the Art Ross win in 1996-97 as well.

There is little doubt that Mario is the greatest one-on-one player. He was unstoppable. "Oh Oh! It's Mario!" was a common call when he was in the open on a breakaway. He scored more often than not on those breakaways. The only way many opponents could stop "Super Mario" was to literally tackle him, and even that didn't stop him from scoring. Lemieux could almost score goals at will.

Fed up with the constant physical abuse and the chronic back injuries, Lemieux opted to retire following the 1997 playoffs. But a couple of years after his retirement the Penguins were in financial ruins. Bad management had the team on the verge of bankruptcy and once again the future of NHL hockey in Pittsburgh was in serious trouble. So who came to the rescue? Mario! Mario, who stood to lose millions if the team had gone bankrupt, gathered together an ownership group and purchased the Pens, keeping them in Pittsburgh. It also marked the first time in modern history that a player became the owner of a team.

Already elected to the Hockey Hall of Fame, Lemieux made even bigger waves when he announced he would come out of retirement for the 2000-01 season. On December 27, 2000, Lemieux returned to the ice as if he never missed a step. He scored one goal and added two assists in that first game back, against the Toronto Maple leafs. Lemieux continued his scoring exploits, finishing the season with 43 games played, 35 goals and 76 points. He led the Pens far into the playoffs, playing 18 games before bowing out.

"I learned how much I loved this game," he said. "Sometimes you don't appreciate something fully until you're away from it."

The fragility that ruined Mario's career returned in 2002. Able to play in only 24 games, Lemieux scored just 6 goals but managed 31 points. In spite of his injury woes, Lemieux was named captain of Canada's Winter Olympic entry for the 2002 Salt Lake City Games. His poise and production led Canada to Olympic Gold. Unfortunately the rigors of the Olympic schedule ended Lemieux's 2001-02 NHL season.

He returned in 2002-03 and held a clear lead in points by the mid-way mark of the season. Once again injuries curtailed his games played and mobility. To make matters worse, Lemieux was forced to trade away his high-priced teammates, and any chance of winning the Art Ross Trophy, to preserve the financial stability of Pittsburgh Penguin hockey.

With injuries plaguing his once-brilliant career, and with the burden of the Penguins' financial woes preying on his mind, and newly discovered heart ailment known as atrial fibrillation, Lemieux was mid-way through the 2005-06 season when he decided to retire on January 24, 2006. Mario had played 26 games, scoring 7 times and assisting on 15 more at the time of his retirement.

There always has been and likely always will be constant debate as to who is better: Wayne Gretzky or Mario Lemieux. Here's my view on it. Who cares? We should just consider ourselves extremely lucky to watch perhaps the greatest and second greatest players of all time, no matter who you rank ahead of the other.

If you were to break down each of their games, you would have to give Mario a huge edge in terms of god given physical talents. Mario was bigger and stronger, with a heavier shot. He was perhaps the best one-on-one player ever. He could do things that Gretzky could never dream of. The only other player who could be mentioned in the same talent level as Mario would be Bobby Orr.
at January 02, 2019