Oilers Bringing Back The Blue 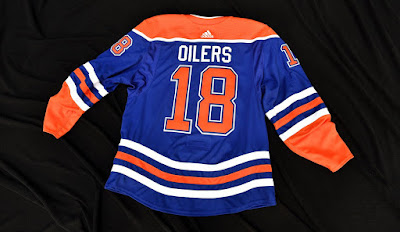 Maybe I'm old school - or just old. But in my opinion the best Edmonton Oilers jersey ever is their classic blue with the orange and white trim. That's the jersey Gretzky and company wore. That is the jersey Connor McDavid should wear, too.

He will in 2018-19. The team has announced the jersey will return for selected games as part of the franchises' 40th anniversary of being in the National Hockey League.

The Oilers wore the blue jerseys from their entrance in the League in 1979-80 through 1996 then again from 2008-17. Edmonton went to its orange jersey for home games last season, and that will remain their primary jersey. It's not a bad jersey, but I still think it should be the third jersey.

McDavid and the new Oilers won't get to wear the classic blue jersey too often, though. The Oilers will wear the blue jerseys for home games against the Los Angeles Kings on Nov. 29, the Calgary Flames on Dec. 9, Winnipeg Jets on Dec. 31 and Vancouver Canucks on March 7.

Now if we can only get McDavid to put on Gretzky's matching blue skate blades....
at September 06, 2018